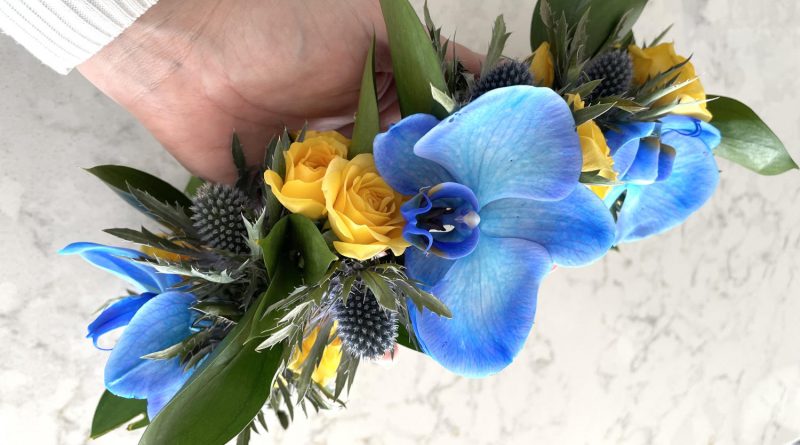 The UK’s florist community has come together to fundraise for the Ukraine humanitarian appeal.

On the four-week anniversary of Russia’s invasion of Ukraine, social media was flooded with images of vinoks, traditional Ukrainian flower crowns. The colourful creations were crafted by florists across the UK as part of a fundraising effort for the Ukraine humanitarian appeal.

One of those taking part was Zoe Burton, founder of Canary Wharf-based Burton’s Blooms. Using blue orchids and yellow roses, the colours of the Ukrainian flag, she created her vinok, sharing the image online with more than a hundred other florists.

‘We wanted to do something as a community where we could put our professional skills into practice’ Zoe explained. ‘The idea came from a few of us to create a social media campaign that incorporates flowers’. This would be used as a vehicle to raise money for the appeal.

They settled on creating vinoks, tiara-like floral crowns that are worn as part of the classic Ukrainian folk dress. Traditionally, vinoks are worn by women and girls on festive occasions, and since the 2014 Ukrainian Revolution they have become a proud symbol of national identity.

For Zoe, they were perfect for a social media campaign. ‘With the colours it was great, they really stood out. Everyone’s vinok was so different: some used dried materials, some used fresh stuff, and we had a really good response.’

Vinoks are created by attaching fresh or dried flowers to a wireframe, with ribbons and other decorative features often included in the design. In pre-war Kyiv, stalls selling the floral headpieces were a common feature of metro stations and markets, and vinoks are often worn by Ukrainian brides on their wedding day.

On the 24 March, more than one hundred florists across the UK shared their creations under the hashtag #crownsforukraine, aiming to raise £1000 for the Disasters Emergency Committee.

The money they raise will help to support more than 10 million people forced to leave their homes as a result of the conflict.

Donate to the Just Giving page.

If you enjoyed reading this you may like to read about Sister Christine.