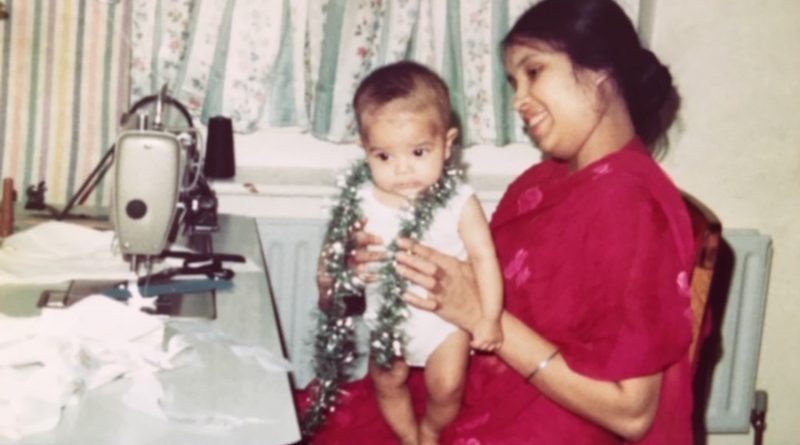 After years hidden away on the fifth floor of an East End estate, Asma Begum’s battered family sewing machine is going on display at the London Museum.

“It’s amazing, dad would be so proud”. Asma’s face lights up as she remembers her father Ashab, an emigrant to London from Bangladesh. Ashab arrived with his wife and eldest daughter in the mid-1970s, among a wave of South Asian migrants, settling in the crowded streets of Shoreditch and finding work in the garment factories of Brick Lane.

Not long after arriving in England, the family acquired an object that would stay by their side for more than four decades. Avocado-green in colour, the metallic sewing machine, with its staunch cast iron base and humming mechanisms, became the family’s livelihood, a sturdy and reliable companion as they navigated life in a new country.

On the top floor of their block of flats on Quaker Street, just off Brick Lane, Asma’s mother Anwara would work long into the night at the whirring machine, piles of fabric and colourful rolls of thread around her, the room filled with the pungent smells of leather.

Now, fifty years on from the family’s arrival in Britain, the machine is going on display at the London Museum. Alongside stories and photographs of the family, it will help to tell the tale of the East End rag trade, and the Bengali community who made London their home.

When Ashab and Anwara arrived in England in 1974, East London was a hub of textile manufacturing, with factories lining the streets around Brick Lane. The work was hard and the days long, and Ashab often worked 70-hour weeks to support his young family.

In time, the family acquired a leather and suede workshop on the upper floors of a terraced house opposite the famous Brick Lane Beigel Bake, and opened a showroom on Kensington High Street.

While Ashab was employed in the factory, Anwara worked from home, using the family machine to sew the intricate linings of jackets. As a child, Asma spent many long afternoons helping her parents ferry bags of wadding and cuts of fabric between their home and the factory.

“We used to live at the top of a five-storey building”, she says with a wry smile. “I would carry bags of wadding up on my back, and once I reached the top of the stairs I’d fling myself into them like they were bean bags.”

Asma’s mother’s bedroom was a workshop of its own, with biscuit tins overflowing with sewing paraphernalia, and the avocado-green machine humming away at her fingertips. “I grew up watching my mother working on the machine”, Asma reminisces fondly, “it was our livelihood, our bread and butter.”

As the garment factories of Brick Lane closed one-by-one, the family kept hold of the machine, and Anwara used it to teach friends and neighbours to sew. “My mother would say, don’t ever throw it away, it’s my lucky charm”, Asma recalls.

In the Autumn of 2018, both Ashab and Anwara passed away. Going through their belongings, one item stood out. Once a blur of needles and thread, the sturdy metallic machine, on which Asma and her siblings had learned to sew, had fallen silent.

“My brother and I used to say it’s a treasure, a relic. The word we use is ‘Holy Grail’”, Asma says. “We knew right away that we couldn’t just dispose of it, we needed to preserve the memories and the history”. The ‘lightbulb moment’ came when a friend suggested Asma contact the Museum of London, who enthusiastically agreed to take the machine into their 1948-2012 collection.

For Asma, the machine represents not only a family heirloom, but a historical object, so what does she hope will come of having it on display?

“On one hand it’s as simple as telling raw anecdotes, about my mother and father settling in a foreign land and making a living, the things they experienced trying to do their job and raise a family.

“But at the same time, it’s telling the story of a prominent time in East End history. For me it was my childhood, I’d go to Thomas Buxton School and then to the factory with my dad, while mum worked at home. But it’s a story a lot of people like me – second generation British Bangladeshi – can relate to.”

Asma describes herself as the ‘translator’ between her Bengali parents, and her children who have grown up in Britain, and she is acutely aware of the need to preserve the memory of her parents’ generation.

“I know my child would ask, how did I get here? Why am I here? My ethnicity is Bangladeshi, but how did I come here and how did it start? Having the machine on display is about documenting those histories. It’s a source of knowledge, a source of education and documentary heritage.”

But despite her excitement at the machine’s new home, handing it over wasn’t easy. “I felt like a father giving away his daughter down the aisle”, Asma laughs. Before the machine was collected, Asma and her sister held an impromptu photo shoot, recreating an image of Anwara sat at the machine, holding Asma as a baby.

Forty years on, Asma is proud to continue her parents’ legacy. Now based in Poplar, she runs sewing workshops on Aberfeldy Street and around the local area. “I feel obliged to teach my participants well”, she says with a grin. “My mother would be turning in her grave if she knew I took a shortcut.”

Alongside sewing, Asma also works as a narrative writer, and has recently finished a chapter for the community book, I sewed, I sewed, I sewed, for which home-based Bangladeshi seamstresses and their families, as well as garment factory owners, were interviewed.

In 2020, she took part in the BBC4 documentary A Very British History: British Bangladeshis, and having the machine on display at the London Museum is part of her ongoing mission to share the story of Bangladeshi women in the Rag Trade.

Seeing the family sewing machine alongside some of the most important objects in London’s history will be the ultimate tribute to her parents, Ashab Uddin and Anwara Begum, and the struggles and successes of the Bengali families who made London their home.

Ashab Uddin and Anwara Begum’s sewing machine will be on display when the London Museum reopens at its new home in West Smithfield in 2026.

If you enjoyed this article, you might enjoy A Day in the Life with Asma Begum