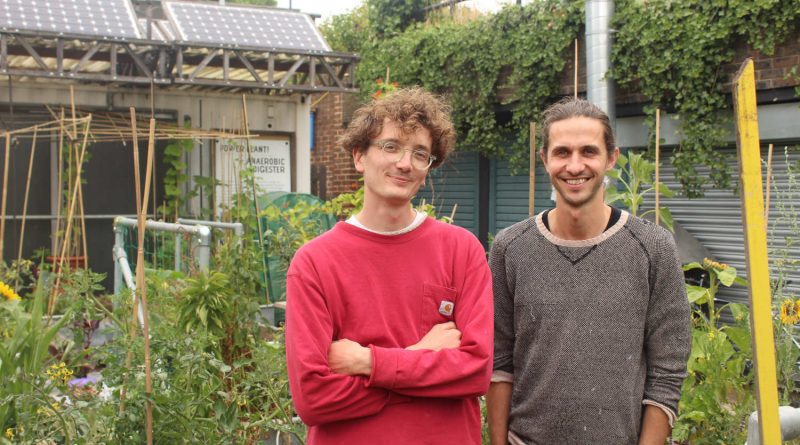 With a self-sufficient garden in the heart of Poplar, could R-Urban’s community-led approach be the solution to sustainable urban living?

Take a walk through Poplar’s Teviot Estate, and you might be surprised what you’ll find. Hidden away among the jumble of postwar housing, one corner of this sprawling development has been transformed, from a concrete jungle to an urban oasis.

In a disused 1950s car park at Brion Place, under the shadow of Balfron Tower, sunflowers bloom from sunken bathtubs, marrows hide under the shade of prickly leaves, and the roving tentacles of a vine clamber up a converted shipping container.

This is R-Urban, an ‘eco civic hub’ aiming to boost local environmental participation and develop a more sustainable model of city living. The project provides a space for local people to garden and grow vegetables, take part in educational workshops including a repair cafe, and cook, eat and spend time together.

It’s here that I meet Katrina, a resident of the Teviot Estate and one of R-Urban’s most industrious gardeners. Katrina has been involved with R-Urban since the project began in 2017, making the most of a space to grow vegetables within walking distance of her home.

“I’ve always loved gardening but I never really had the space”, she tells me on a tour of her patch. “I’d grow things on balconies, or in small gardens, but as soon as I had the place looking nice, the landlord would sell the house.”

Now, Katrina can grow to her heart’s content, and she proudly points out the butternut squash, cauliflower, courgettes and tomatoes she has grown, along with the artichokes, whose elegant purple flowers bloom from their spiny shells.

Among her fellow gardeners, Katrina has gained a reputation as an innovator, cutting the heads off seeds to help them germinate faster. Her experimentation and enthusiasm for the project has led her to lead workshops of her own, sharing her gardening skills with neighbours and friends.

As we chat, Aisha, another regular, arrives with her kids. “This place is amazing”, she tells me, as her two youngest chase each other between the planters. “There’s so much going on for the kids – we’d come here every day if we could.” Last week, the family were down for a pepper planting workshop, and Cameron, a project leader, asks the children how their seedlings are getting on.

Workshops like this are a huge part of what R-Urban provides to local residents, but it is crucially important that the project is led and sustained from within the community. The garden is open at all times for volunteers, regular or not, to get involved with maintaining the beds, while eleven local families have their own irrigated bathtubs to grow vegetables in.

“It’s about harnessing the power of local people”, Cameron tells me. “Our biggest success is having a network of companions in the community, who bring their own angles and interests to help the project grow.”

But while R-Urban is heavily focussed on its community offering, it is also piloting innovative ideas in environmental science. On a tour of the garden, Cameron introduces one of R-Urban’s most exciting pieces of tech, an anaerobic digester. Hidden inside a wooden cabin, the boiler-like contraption consists of a large tank in which food waste, collected from local homes, is composted.

Not only does this digester produce ‘Poplar compost’ for the garden, and leachate, the nutrient-rich liquid that seeps from it, it also captures the natural gas that is produced by the decomposing organic matter. That gas is piped off and stored, ready for use in R-Urban’s community kitchen. Meanwhile, waste water from the kitchen is funnelled through a filtration system of tanks, from which plants grow, and the water that comes out is ready to use on the garden.

It’s an amazingly circular process, and one that the team here hopes can be replicated on a larger scale. “We’re a testing bed”, Cameron explains, “it’s about proving what you can do with food waste, and pushing the infrastructure forward.”

While the collection of natural gas from food waste is often done on an industrial scale by city councils, Cameron is more excited at the potential of decentralising the infrastructure. “For example”, he tells me, “if all the waste from a single block of flats was composted internally, and the gas captured, it could provide a significant amount of energy without the need for polluting lorries and enormous industrial facilities.”

Back outside, Cameron shows me to another of R-Urban’s works in progress, a multi-layered moss wall. One of the R-Urban team is conducting research on the capacity of moss to filter pollution, with the idea of incorporating it into architectural designs. The prospect of tower blocks carpeted with pollution-busting moss is compelling, especially in a borough that suffers from some of London’s worst air quality.

And while these projects might appear far-fetched, they’re not as far off as they seem. The Teviot Estate is currently undergoing regeneration, and the hope is that the ideas and projects pioneered here – social, environmental, and technological – can be integrated into the plans.

But in the short term, R-Urban’s priority is in growing the community-based projects they have started. They hope to expand the food waste collection scheme, boost their production of ‘Poplar compost’ and natural gas, and expand their educational offering with skills-based workshops.

Back in the kitchen, Andy, another of R-Urban’s project leaders, serves up minestrone soup. The kitchen is a hugely important part of R-Urban’s community offering: vegetables grown in the garden are cooked here (using their own natural gas) and eaten communally by volunteers and residents, creating a hyper-local ‘closed food loop’.

It’s just one of the forward-thinking ideas being pioneered in this unassuming Poplar car park, that might just be paving the way for a revolution in sustainable urban living.

To find out more about workshops taking place at R-Urban, visit their eventbrite page

If you enjoyed this article, you might like our interview with Asma Begum, whose family sewing machine is going on display at the London Museum