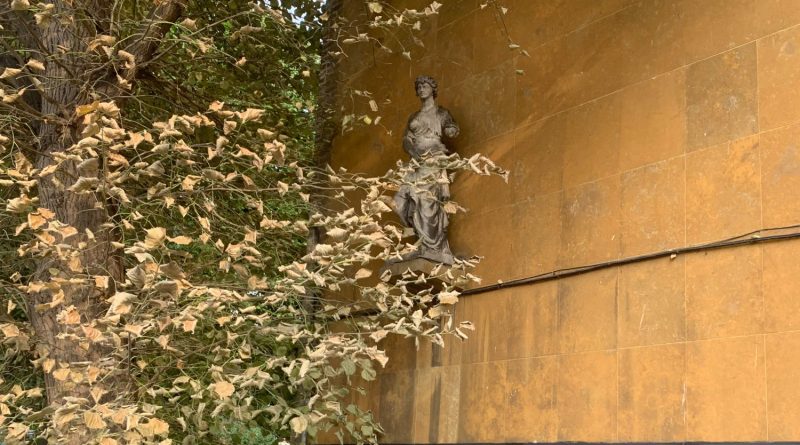 Have you ever wondered about the mystery statue high on the wall of the Lansbury Lawrence school? Our reporter hunted down the facts on one of Poplar’s best kept secrets…

If you’ve ever taken a walk past the Lansbury Lawrence School on Cordelia Street, you might have found your eyes drawn upwards. From midway up the grubby tiled wall, a mysterious figure peers down on passersby, like a roadside shrine watching over Poplar pilgrims.

Weathered and worn by decades of exposure to the elements, the statue depicts a classical figure of a woman dressed in a toga, with her left arm snapped off at the elbow. But who is this secretive siren, and what is she doing on this Poplar side street?

The story goes back to the mid-1800s, when a pub called the Horn of Plenty stood at 10 Cordelia Street, the site where the school now stands. The toga-clad woman was part of the decoration on the pub’s exterior, and was one of many statues that adorned the Randall’s Market area, then Poplar’s main shopping precinct.

A clue to the statue’s identity comes from the name of the pub. In her right hand the statue clutches what looks at first like a scroll, but is in fact a cornucopia, a horn filled with fruit and flowers that was a classical symbol of abundance in Ancient Greek and Roman culture. In more recent times, the cornucopia has become known by another name: a horn of plenty.

In antique sculptures, the horn of plenty is often seen being held by Demeter, the Greek goddess of the harvest, or her Roman equivalent Ceres, and it seems likely that the proprietors of the Horn of Plenty pub chose to adorn their pub with that figure.

During the Second World War, thanks to its industry and proximity to the London docks, Poplar was heavily bombed, and the Horn of Plenty pub, along with much of Randall’s Market, was destroyed. After the war, when the market was cleared, the statue was found amongst the rubble, with its left arm damaged as it can be seen today.

What became of the statue then is unclear, but in the late 1940s, work began on rebuilding Poplar. The new Lansbury Estate was built as part of the Live Architecture exhibition for the 1951 Festival of Britain, and included the Susan Lawrence School, named after the iconic Poplar council member who was imprisoned for her role in the Poplar Rates Rebellion.

The architects of the school, Yorke, Rosenberg, and Mardall, as well as their project leader Kenneth Grieb, decided to mount the statue on the side of the school, on the site of its former home. They hoped to install a plaque, but neither the architects nor the LCC were willing to pay.

In fact, as late as 1977, Kenneth Grieb was continuing to push for the plaque, hoping to raise funds for it through an article in a local newspaper. He even suggested the plaque should denote a poem he had written:

To tell the truth, it is my rule,

I was not always at this school.

At the Horn and Plenty pub.

However, his campaign was in vain, and the plaque never materialised. Instead, the mystery statue of Cordelia Street joined the beguiling catalogue of hidden Poplar histories.