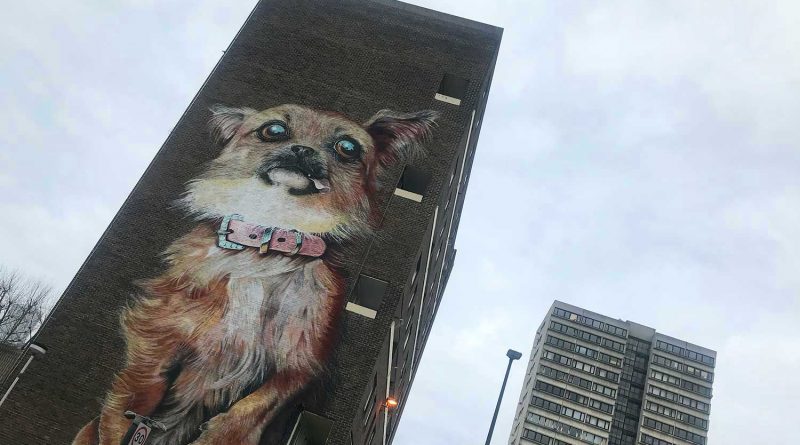 Have you ever wondered why there is an 80 foot mural of a Chihuahua on Chrisp Street in Poplar? Now an iconic piece of street art in the area, this is the story of how this unconventional piece found its place in the East End.

The Poplar Chihuahua has towered over Chrisp Street since it’s installation on the side of Kilmore House in 2014. This piece of street art is from the Street Artists Irony and Boe. “There is just something inherently funny about a chihuahua that is that big,” Irony says “The idea behind the chihuahua was symbolizing gentrification. The chihuahua is quite the  middle class animal and it has associations with money, designer bags and Paris Hilton. We liked the idea of making it the symbol of gentrification and making it visible to people and this picture of a chihuahua which would be the size of Godzilla would do that.”

Garry Hunter, Creative Director at the Fitzrovia Arts Institute, curated the project and offered the space to Irony and Boe when it was made available. Garry says: “We wanted to show the aspirations of the area, making something perceived as small into something large and unmissable, because Poplar is sort of lost in that lowland between the shining corporate towers of Canary Wharf and the sporting pinnacles of the Olympic park in Stratford, it’s in the middle and it’s largely forgotten by many”

The piece was installed in June 2014 and took Irony and Boe four days to paint. The design was based on a chihuahua called Knight of the Hunter owned by Artist Cate Halpin, a friend of Garry Hunter’s. Garry says: “I wanted to put something up that had a bit of meaning, I wanted something that would make people stop and think why is that there? and I think we succeeded.”

East London is synonymous for street art with areas like Shoreditch attracting a lot of attention but Poplar over the last few years has also started to gain traction with pieces of art popping up across the borough. Garry says “There were no large pieces of artwork in Poplar when we started and the chihuahua had quite the message behind it. If it had gone up in Shoreditch it would’ve just got lost in the mix and would probably get painted over. The fact that it is where it is, is a real statement.”

The Chihuahua is now a renowned part of Poplar, with the community majoritively appreciating the unconventional piece of art on Chrisp Street. Garry says: “The reaction was kind of mixed to begin with but I think it’s been accepted now. In terms of national recognition and the area, it has become a symbol of Poplar and there is a bit of civic pride with it.” Many residents of Poplar describe the chihuahua as cute, bright and cheery but the artist Irony thinks differently.

“I love that dog mural and It was a great opportunity for me” Irony says “but if i could do it again, I would’ve made it more grimey. You’re not supposed to like it, it’s supposed to be poking fun at that sort of stuff. We wanted it to reinforce the point of gentrification and that is is something we should be worried about. The class changes and stuff particularly in certain areas where they are taking over and shoving people out. A dog the size of Godzilla is going to cause problems for you eventually and in retrospect, I would’ve made it a little bit more grungey to show that.”

The Poplar Chihuahua has stood over Chrisp Street for 7 years and has become a statement feature of the area. The piece is not just a one dimensional piece of art but something that has a message and a stance behind it. Poplar has produced more pieces of street art over the recent years and hopefully will introduce more in the future but for now, if you want to check out the Poplar Chihuahua you will find it at the far end of Chrisp Street. At 80 feet tall, it’s not hard to miss.