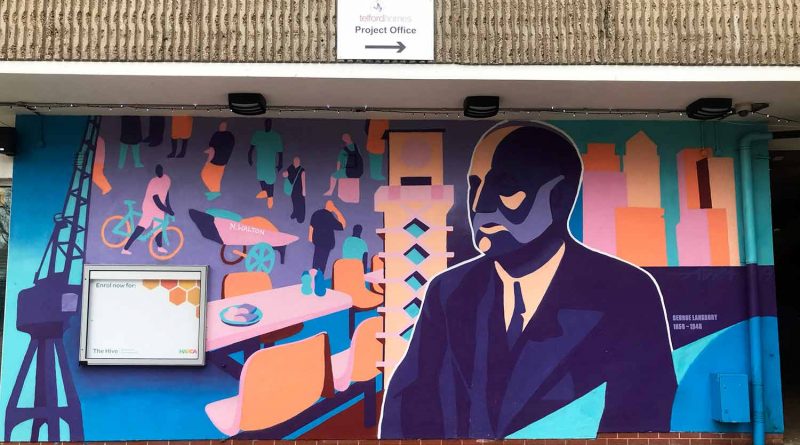 Did you know Poplar is a rising star for street art in East London? With some very cool pieces just minutes from the iconic Chrisp street we pulled together some of the very best art from around this notable East End spot for you to check out.

East London is renowned for street art and for years the trendsetting Shoreditch has held the crown for the vast and varied amount of art that graces it’s streets. But there are contenders coming up behind. Poplar is fast becoming a hub for street art with artists from all over the world adding their work to it’s walls.

From animals to abstract we have collected the very best of Poplar’s street art around Chrisp Street for you to check out.

In 2017, Poplar was visited by the Brazilian street artist Bailion. A former resident of London and frequent visitor to the city, he hit up Poplar and give us this brilliant piece of art on the brickwork of Kerbey Street. Bailon’s work is inspired by the blend of nature, life in the city and what it means to be human. His distinctly warm and vibrant design of a bird bursting out of the side of the Barclays Bank is a fabulous addition to the little street just off East India Dock Road.

Head over to the iconic Chrisp Street Market to see the Poplar Arrows, painted by American Street Artists Above. The arrows were installed in 2014 and initially the arrows were to cover 20 shutters across 10 shops but once the project began, more shop owners across the square wanted the arrow branding. It meant that Above then painted his signature arrow on 46 shutters, across 19 shops, in just 48 hours.

Global Street art, on behalf of Above, approached Poplar HARCA with the concept knowing that they wanted a way of renovating the 1960’s market square. The arrows have remained at Chrisp Street Market, the best time to go? Obviously early doors before the shops open but if you stick around you can grab yourself a coffee at Carmen’s Family Coffee House.

A Banksy? In Poplar? Are you serious? Yes! A real life Banksy in Poplar. Painted in 2011 as a response to the phone hacking scandal, this little guy can be found in a small car park at the end of Chrisp Street. Hidden away towards the end of Chrisp Street, this Banksy piece is situated in a carpark next to the Poplar Chihuahua. This piece wasn’t the only Banksy Street Art to be in Poplar, sadly the other was covered many moons ago. So for now, if you wan’t to see a Banksy – You know where to go.

Right next to the iconic EastEnders Pie and Mash Shop sits a weird and wonderful piece of street art. It was painted by Tel Aviv Street Artist duo Extra Crunchy in 2018 who have painted their creations across the world, from India to Guatemala, from Panama to Poplar! Their artwork has featured at some of the most famous street art festivals in the world including the Vancouver Mural Festival and Europe’s Urban Paint festival UPFest. This gloriously colourful fish by Extra Crunchy is a quirky addition to East India Square.

Now another addition to Kerbey Street, this ferocious piece just opposite the wonderfully colourful fish was painted in 2018, as part of Global Street Art’s Walls Project by American Street Artist Matt Dean aka Kiptoe. Painted on the back alley of Kerby Street, the piece is called “Fate” and the awesome mish-mash of orange big cats and blue silhouettes is something you don’t see everyday. The synonymous design from Kiptoe is a cool fit for this backstreet in Poplar and we think another Kiptoe piece deserves a place in the streets of Poplar.

Further down the infamous Kerbey Street is another Global Street Art piece designed by Street Artist DRT and painted in 2017. We will always love the walls that have seemingly been taken over by a triangle loving, abstract street artist with a fondness for a rather bright colour palette. Most of DRT’s work resembles stained glass windows and can be found across London. This Poplar piece is a jazzy and pretty funky, and something we would like to see more in Poplar. DRT, fancy coming back to do more?

Another amazing piece we have to thank Global Street Art for. Painted just off Kerbey Street Artist by Chris Riggs in 2017, the Love Wall is a bright and colourful addition to the back streets of Poplar. Riggs’ work carries a political undertone, and his ‘love murals’ are being painted around the world with the message, ‘Peace and Love is the only solution’. This colourful piece of work

This community piece was actually down to local business East Enders Pie and Mash. Brain, the owner of the iconic Poplar shop, wanted a piece of art next the new outdoor seating area for the shop and he wanted it to be reflect the area and the community it was in. The mural is of George Lansbury, a major figure in the history of Poplar. He was the first Labour Mayor of Poplar in 1919, and he also led the Poplar Rates Rebellion in 1921. The artist of the piece, Agwa, took this on as a personal project as they usual work in commercial art, the project was also partially funded by Poplar HARCA.

If you enjoyed this piece on street art you may like our feature on the Poplar Chihuahua.