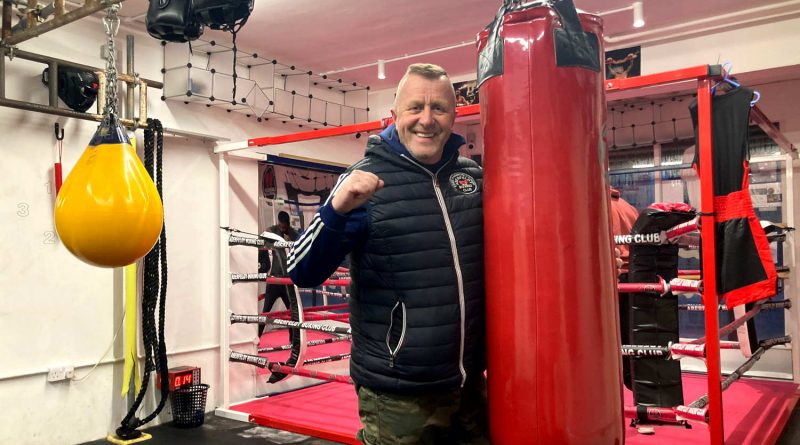 “I’m an East Ender, I love the East End. I’m always going to protect my home, aren’t I?” Kirk Whitelock says, looking at me with steely light blue eyes.

What Whitelock loves most is that East Enders always look out for their own, no matter how successful they get.

In 1995, Esther Tracy, a woman who lived on Aberfeldy estate, won £1.4 million in the National Lottery.

Whitelock had recently started football coaching for his son and other boys in Poplar, and she offered to sponsor their team.

Thanks to Tracy they had the flashiest tracksuits and bags, and Poplar United’s skill matched their style.

Poplar United won nearly every match they played over their six-year run, and even secured the London Cup.

“We used to sing at every game,” Whitelock reminisces. “Every cup final we used to have 400 fans with us from little Aberfeldy.”

Whitelock’s latest venture, Aberfeldy Boxing Club, started when he began doing boxing training on Millennium Green with his grandchildren and other local kids.

Whitelock has a gruff voice and rarely breaks eye contact, but walking through the club’s two small units he warmly greets everyone he passes with a chest bump.

“East End people are real people,” Whitelock says. “Jessie and Lorraine are stars of the telly, but they still care about this club and this community.”

Whitelock remembers watching his grandparents lend their neighbours sugar or coffee when they’d run out, and says that he and his neighbours still watch out for each other.

“I hear certain places don’t do that,” he shrugs. “I don’t know, I ain’t lived in other communities.”

Stop the stabbing, stick to jabbing

Whitelock left school at 15 and was signed with Queen Park Rangers, but suffered too many injuries to his legs and ankles to become a footballer.

After moving from the Isle of Dogs to Aberfeldy estate, he spent his early 20s hanging out at the local pub, fighting at football matches and getting arrested with his friends.

“When I had kids, something in me clicked,” Whitelock says. “I thought, I’m going nowhere in life fast. A lot of the people I used to knock about with are dead now, or still in jail.”

At age 28, Whitelock started to turn his life around by changing his friendship circle, drinking less and founding Poplar United.

He eventually worked as a scout for Tottenham Hotspur and managed Eton Manor and Woodford Town.

“Football outgrew me,” Whitelock says. “I’m old school, and footballers these days, they get a knock on the ankle and they roll over about 100 times. Back in my day, you’d kick and punch and pull each other’s hair and get up and it’d be sorted.”

Whitelock turned towards teaching kids a sport which embraces violence in a positive way, and found a home for his boxing club on Aberfeldy Street in March 2020.

Despite withstanding three lockdowns in their first year of opening, the club was an instant success.

“I think boxing has grown on more people during the pandemic because of the mental health side of it,” Whitelock says. “When you’re stuck indoors for nearly 18 months and then you can come into a gym and express yourself, some people get angry.”

“They take their anger out on a bag, rather than going on the street and getting themselves into trouble. It doesn’t cause anyone harm, and they feel better for it,” Whitelock says.

Whitelock lost two Poplar United players to knife crime, and a few months ago his friend’s 19-year-old son was killed in a road rage incident by a 15-year-old boy.

Aberfeldy Boxing Club’s motto is “stop the stabbing, stick to jabbing,” to encourage kids to channel their frustrations into the discipline of boxing.

Their slogan T-shirts have been worn by four belt World Champion boxer Josh Taylor, Mark Wright from The Only Way is Essex, and every member of Crawley Town Football Club.

“Knife crime is a horrible disease, its kids killing kids,” Whitelock says. “If I can save one life by getting a kid interested in boxing instead of gangs, I’ll die happy.”

A year and a half ago, a boy came into the gym and told Whitelock and the other coaches he was in a gang but no longer wanted to be part of it.

“We turned his life around because he came for help. He didn’t have a bank account, he didn’t have nothing,” Whitelock says. “He’s still here, and his mum has been in to thank us.”

Whitelock’s two daughters and four grandchildren all train at Aberfeldy Boxing Club, but that’s not the only reason he calls it a family club.

Aberfeldy Boxing club is a nonprofit organisation, and all the coaches are volunteers.

“We don’t do it to get paid money, because we don’t get no money,” Whitelock says. “We do it to help others, that’s why we’re here.”

During half term in 2020, the club fed 160 kids free chicken and chips — and even gave some to their families.

“It was only supposed to be for the kids doing boxing classes, but if a mum turns up with her four kids, we’re going to feed them,” Whitelock laughs. “We even gave her some dinner to bring back for her husband.”

“We had a couple of Muslim women in the class today which I’m very proud of,” Whitelock says. “Their husbands often don’t like them being where men are, so we pull the curtains down and make it a women-only class.”

Due to their roaring success, Poplar Harca has promised Aberfeldy Boxing Club a permanent space in the Aberfeldy Village development.

“I know promises can be broken, but you can’t make promises to a boxing club and kick 100 kids onto the street,” Whitelock says. “That would cause a riot.”

If you enjoyed this, you may like Tommy Flowers: a meanwhile pub that’s here to stay.