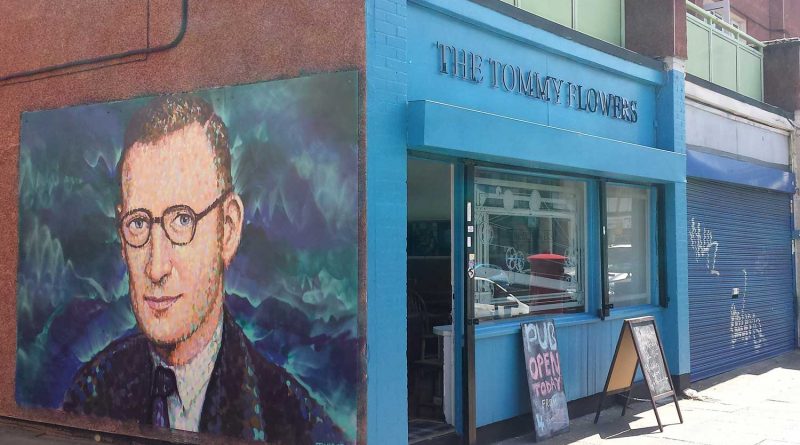 The Tommy Flowers Pub on Aberfeldy Street was originally a meanwhile space but with an extension added to its lease – this meanwhile pub isn’t going anywhere just yet.

In the years around 2018, the area of Aberfeldy had seen better days. The high street had started to look a little run down, and a little empty after losing a few of its shops over the previous few years.

Where a flower shop once stood, sadly sat an empty space and this was the chosen site that Poplar HARCA offered to visual artist Garry Hunter and photographer Nick Joubinaux to open up a ‘meanwhile’ pub.

A ‘meanwhile space’ is the use of temporary contracts that allow community groups, small businesses or individuals to move into vacant spaces and set up shop, on the understanding that they will have to leave within an allotted time.

This was the original plan for the Tommy Flowers Pub, who were offered an initial lease from April 2018 – April 2020.

The idea for the pub came about as Aberfeldy didn’t have a pub, or even a social space. ‘There was a real need on Aberfeldy for a pub, for just somewhere people could go in the evening. But that wasn’t the only thing we wanted to offer’ says Garry Hunter, Project Lead for the Tommy Flowers Pub. ‘I always envisioned a multi-use community space really, and with the local area having a very mixed population we wanted to establish a creative-led resource for everyone to hopefully enjoy.’

The pub is a homage to Thomas “Tommy” Flowers (1905-1998) who was born a short walk away at 160 Abbott Road, Poplar. Flowers first worked as an engineer with the British Post Office, then went on to Bletchley Park to work with Alan Turing on the Enigma project and, in 1944, was later put in charge of the team that built Colossus, the first modern computer.

To take the small space from a florist, which is hilarious as the florist was to become a homage to a man called Flowers, to a pub wasn’t a DIY SOS scale project; the refurbishment was done by a team of young volunteers through the Volunteer it Yourself company.

They incorporated elements of the flower shop into the design of the pub. ‘The bar itself used to be the counter where they used to cut and wrap flowers. We wanted it to look like someone’s living room, a space that everyone could feel welcome and comfortable in, up-cycling as much of what was left from the florists as possible,’ said Hunter. ‘Talking to residents, we realised that if it looked too flash, too much like a wine bar, we would’ve alienated a lot of the community and we didn’t want that.’

The pub didn’t just pay homage to Flowers by way of its name. ‘Colossus’, the computer that Tommy designed for Bletchley, is also written in the front window by glass artist Tom Chadwin. There is also a mural.

‘We wanted a mural of Tommy on the gable end and we managed to get one of the world’s leading street artists, Jimmy C to do it. He did the famous Bowie piece in Brixton so we were very happy to get him. The mural is brilliant and kicked off the whole street art explosion on Aberfeldy.’ says Hunter.

After a few weeks, the micropub was complete with its only two draft beer lines standing by, local art pieces hung on the walls, comfy pillows thrown on the benches, the mixed matched chairs set to place and with an upright piano and projector screen ready to go.

The Tommy Flowers Pub opened its doors on the 5th May 2018 and the community welcomed it with open arms.

April 2020 came and went and – play some Elton John – the Tommy Flowers pub is still standing. In 2020, Poplar HARCA extended the lease for another two years which means this meanwhile pub will be remaining at 50 Aberfeldy Street until at least summer 2022.

‘I have stepped back from running the pub now and I’ve handed the reins to Nick who I know wants to continue what we started together, for as long as possible.’ said Hunter ‘I’m now refurbishing the next door unit, a long-empty old post office, into a modular space for emerging groups to try out new ideas of engagement.’

Poplar HARCA has recently shared its plans for the regeneration of Aberfeldy Street, so with development concretely set for its future we don’t know how long the Tommy Flowers pub has left in its current home.

Let’s hope that a version of the Tommy Flowers pub will be built as part of the new Aberfeldy, so that the community can continue to enjoy a pint of draft Guinness, a packet of crisp and a bit of glassblowing.

If you liked this, you may like Ravaa Fine Fusion Review: Poplar’s contestant for best East London curry house