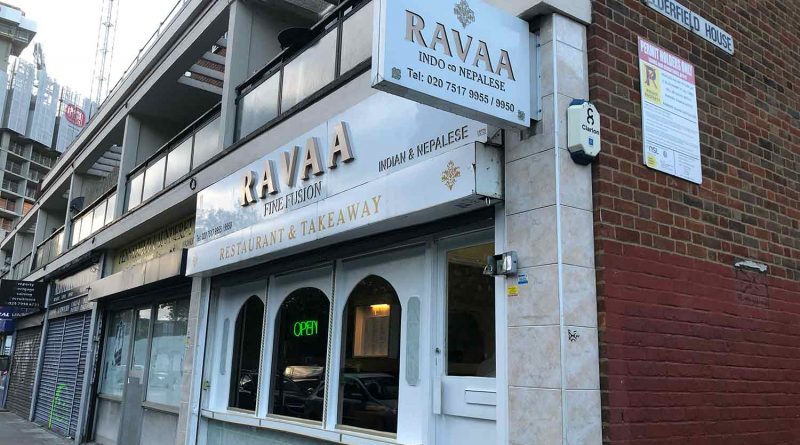 With its friendly service, mellow atmosphere and most importantly, good curry Poplar’s family-run Ravaa Fine Fusion rivals the curry houses on Brick Lane for its taste of India.

When you think of curry and East London, your mind will immediately take you to Brick Lane and the abundance of curry houses littered down it, all claiming to be the best.

Poplar has its fair share of Indian restaurants that rivals this claim with one restaurant in particular coming to mind. We headed down to Pennyfields Lane to check out Ravaa Fine Fusion on the Tuesday after covid-19 restrictions were eased.

The restaurant/takeaway, at 11 Pennyfields, owned and run by two young men with their uncle, is a fusion of Indian and Nepalese cuisine and has a plethora of five star Tripadvisor reviews raving about their food.

We were warmly welcomed and as we nestled into our corner table we were offered some poppadoms and of course we eagerly said yes.

The customary poppadoms arrived quickly and were still slightly warm as we cracked into them. They were paired with a selection of sweet mango chutney, lime chutney, tangy onion salad and mint and cucumber yogurt.

It was a quiet evening at Ravaa, nothing like what it would’ve been like before the pandemic but it didn’t feel awkward or uncomfortable being the only customers as the servers were chatty and incredibly friendly.

The decor was warm, comfortable and traditional but with modern twists which was probably implemented by the younger owners. With mellow lighting, golden tablecloths, white decorative napkins and a deep red carpet the restaurant looked and felt clean and cosy. The plastic coverings on the tables didn’t scream luxury dining, but it did save the table cloth when we spilt a little mango chutney.

Soft and traditional Indian music played as we perused the extensive menu sipping our drinks, I went for the Indian Kingfisher lager as I couldn’t think of a better duo than curry and a beer.

You can’t have a curry without the added extras so of course we opted for some vegetable samosas and onion bhajis to start us off.

With two in a portion it was the perfect size for a starter, filling you up but leaving you wanting more. The bhaji was beautifully spiced with a slight crispness to it, and the samosa was piping hot with a crispy pastry and stuffed with aromatic vegetables.

The menu consisted of an incredibly wide range of choice from the classics to the chef signature dishes, to a Nepalese selection.

My curry of choice that night was the vegetable dopiaza which is a north Indian dish of potatoes, peppers, tomatoes, onions, coriander, fresh fenugreek cooked in mustard oil.

We also went for the vegetable saag which is a traditional Punjabi dish cooked with fresh spinach, garlic and red onion. We added some lemon rice to share too because you can’t have curry without rice.

The curries arrived and we were not disappointed. The flavours of the dopiaza’s thick sauce were vibrant and bold, it wasn’t spicy but the subtle heat tingled on the tongue after every bite. The flavour of the saag was soft but rich, it was milder than the dopiaza but packed with flavour. Both dishes had an essence of smokiness to them, most likely from the charcoal, and were incredibly moreish. You just couldn’t put down your fork.

When we received the bill, it came with complimentary After Eight’s and some lemon hand wipes, which was a reference to a part of Indian culture where you eat with your hands.

For a meal for two, with two starters, two mains, a side and two drinks, the bill came to only £28, which is astonishing for the quality we received.

That night we were given friendly service and beautiful food that had flavours that upheld traditional tastes but wowed us with exciting extras.

In the times we live in, we have to celebrate local, independent businesses and support them as much as we can. This ‘hidden gem’ of a curry house proves that there are some great finds if you stray away from the popular spots and head off the beaten track.

If you liked this, you may like The Story of Chrisp Street Market.