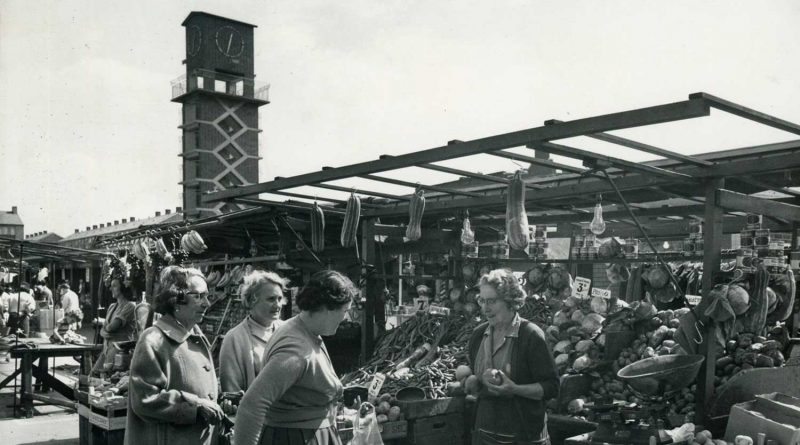 Chrisp Street Market is at the heart of Poplar and has been a key part of the East End community for the last seventy years and here is its story.

Chrisp Street Market back in the day

The market has been around since Victorian Britain, where market stalls would litter down Chrisp Street as all markets did back in the day. It gained popularity around the 1860’s Costermongers, another word for street traders in London, migrated up from Poplar High Street and around the docks to Chrisp Street. The Costers developed their own culture  which included their own rhyming slang, a distrust of the police and the election of pearly kings and queens. Much of what we think of as Cockney culture originated from the Costers.

Chrisp Street itself was named after Sir Nicholas Chrisp who lived nearby at Bromley Hall Manor House in the 17th Century. The East End bore the brunt of the Blitz and the area around the docks was devastated in the war, so the market moved from the street that gave it its name in 1951 onto the new site where a newly laid out market square was created and still stands today.

The Festival of Britain 1951

The current market square was designed by English architect Frederick Gibberd and was built as part of the Festival of Britain in 1951. The festival was an attempt to give Britons a feeling of recovery and to promote better quality design in the rebuilding of towns and cities. The market was widely praised leading to the design being copied all over Britain.

Chrisp Street Market Square was the first purpose-built pedestrian shopping area in the UK and features the prominent Chrisp Street Clock Tower. The tower is a landmark and is there to represent England’s first piece of planned modern urban renewal in the post-war period. It is a striking example of early post-war architecture and one of the first examples of the aesthetic which became known as ‘Festival style’.

The market was buzzing throughout the fifties and sixties with market stalls open six days a week hosting stalls selling fruit, vegetables, fabrics, confectionary, spices, and furniture with eateries selling traditional East End and multicultural delicacies. The market square also featured many shops including a bakery, butchers, pubs, launderette, cafes, a community library and flats built as part of the Lansbury Estate. The name was a reminder of George Lansbury, one of the first Labour MPs who represented the local area.

By the 1970s part of the market was showing signs of age and needed refurbishment which were carried out in the 1980s.In the 1990s, the London Docklands Development Corporation contributed £1.3 million for the refurbishment of the market area and in 1997 it was made into a conservation area.

Chrisp Street Market of the future

In 2006 Tower Hamlets London Borough Council transferred ownership of the shopping arcades along with Lansbury Estate to Poplar HARCA and in July 2016 Poplar HARCA put forward plans to redevelop the entire market square. The work is set to rebuild the market square to introduce new market stalls, new retail spaces, a cinema, two pocket parks, a new Sure Start centre, a community hub and the restoration of the Festival of Britain clock tower. Poplar Harca are also planning to build 649 new homes. The work is planned to be completed by the end of 2026.

Successive regeneration projects have utilised the market as a way of engaging residents and traders in Poplar, focusing variously on health, culture, skills and training, workspace and business support.

While the area is set to go through significant change in the decade ahead, it is clear that Chrisp Street market will remain central to social and economic life in Poplar and can act as an anchor around which residents and businesses, old and new, can engage.

If you enjoyed this piece on street art you may like our feature on the  Poplar Chihuahua.