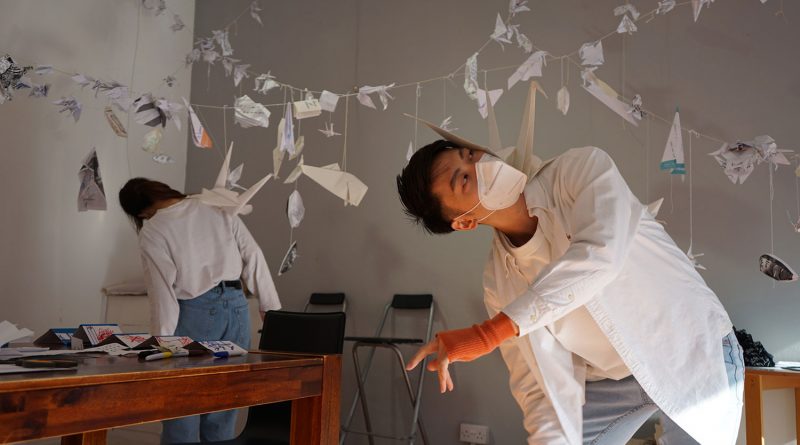 The community installation, created in a collaborative effort by Hong Kong art trio ShumGhostJohn, uses East Asian folktales and traditions to tell the story of human resistance within the history of Poplar and currently in Hong Kong.

The ‘Thousand Papers’ exhibition, created by the trio John Chan, Ghost Chan and Pui-Yung Shum, is a collection of origami, which is a Japanese art form that is popular in Hong Kong, that holds the contributed messages from spectators. They encourage participation in sharing hopes, dreams and thoughts on random scraps of paper. They then showcase an improvised performance of folding the paper with the performances using physical gestures to represent the ‘energy’ of social movements.

The origami is then tied onto strings and long strands of paper which hang across and between the walls of 48 Aberfeldy Street, this is to signify the Poplar community’s hopes and dreams hanging high, some off a branch taken from Aberfeldy Millennium Green that hangs from the ceiling. Every piece of origami contributed is kept as part of the installation.

Poplar was decided as the first home for ‘Thousand Papers’ because of the Poplar Rates Rebellion in 1921. ‘What happened in Poplar 100 years ago is happening in Hong Kong right now, 47 candidates and activists have been arrested and face charges for campaigning for democracy’ says John Chan ‘thirty councillors were sent to prison in Poplar during the rates rebellion because they were fighting for something right and the how it mirrors Hong Kong today is mind blowing.’

‘We wanted to raise awareness of what is happening in Hong Kong right now, and why the people of Hong Kong need to protest’ says Chan.

The event was also part of Poplar Union’s Poplarism! Festival and hosted a walk along on a Facebook livestream on Saturday 1st May. The event showcased ShumGhostJohn sharing the tale of a North Koreon defector swimming across the Amrok River, the river between North Korea and China. ShumGhostJohn accompanied the story showing the spectators how to make an origami boat, they then paraded the group and their boats down the colourful Aberfeldy Street.

The installation opened on Wednesday 28th April with a performance at the site, which sits next to the Tommy Flowers Pub, was covered in paper that featured real quotes from the Poplar Rates Rebellion Mural. This was then ripped down by the trio which showed the fragility of the paper but represents the power that the words of encouragement and solidarity gave at the Poplar Rates Rebellion Mural, and that the Lennon Walls give in Hong Kong.

‘Our aim was to celebrate Poplarism because what happened here was important. The links it has to Hong Kong was also something close to my heart and this is a project that I am incredibly proud of’ Chan says when discussing how the community reacted to the project, ‘the community around us here at Aberfeldy have been interested in what we are doing, many passing by have come to ask us about our project with a few contributing their words. I have loved working on this and I’m passionate about what we are sharing and if we can, we will come back to Poplar again.’

If you fancy heading down to Aberfeldy Street to check out the Thousand Papers Exhibition by ShumGhostJohn, it will run everyday 2pm-7pm until Thursday 6th May 2021 and closing the event, the trio will join Whitechapel Gallery’s First Thursdays in Poplar which will be live streamed on ShumGhostJohn’s Facebook page.

The Thousand Papers Exhibition was curated by Sandra Lam and facilitated by Fitzrovia Noir. It is  supported by Poplar Union, Finborough Theatre and Whitechapel Gallery.