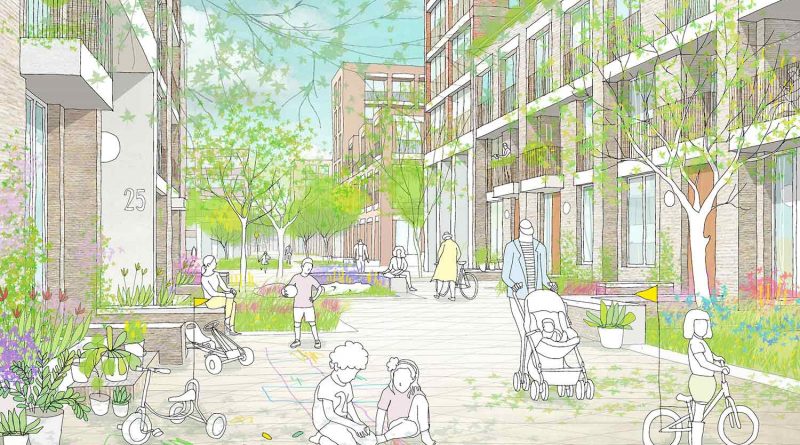 The Aberfeldy Street regeneration has begun and with overwhelming support from the community, is paving the way for what retail revival should be.

In 2013 it was announced that Aberfeldy Street was to receive a facelift and not just a bit of botox, but a full scale £250 million reconstruction.

The goal of this regeneration is to create a space that feels like a village and gives the community a local hub that they can be proud of.

Last week Poplar HARCA released images for the new look planned for Aberfeldy Street and announced that Hackney-based Morris + Company and Architects Levitt Bernstein have been appointed in designing the next phase of the regeneration plans.

Poplar HARCA along with EcoWorld London and Aberfeldy Big Local launched their first round of public consultation for the Aberfeldy Masterplan in November 2020, which shared the idea to build a ‘five-minute neighbourhood’ on Aberfeldy Street over the next 20 years.

The plans proposed by Poplar HARCA are for a four-fold expansion of Aberfeldy’s housing which would add 1,880 more new homes to the area, which will be a combination of social rent, shared ownership, and private sale homes.

The regeneration also plans to give Aberfeldy a new health centre, a faith centre, a community centre, a gym, a pharmacy, and several new retail spaces which include cafes, restaurants and coffee shops.

All these spaces will be energy efficient with all the heating and hot water will be provided by a centrally located on-site energy centre. It will also aim to help make the area safer and easier to walk and cycle, and also greener planting more trees, bushes and adding more floral green spaces to help battle air pollution.

Poplar HARCA says that the residents are at the heart of Aberfeldy which is why a referendum was chosen to decide, ‘voting for regeneration means Aberfeldy residents have entrusted us to make the real, positive difference they want,’ Steve Stride, the Chief executive of Poplar HARCA says, `We will deliver on every promise; and look forward to residents remaining at the heart of the decision-making for where they live.’

‘High streets are vital spaces that bring communities together,’ Matt Townend the Chief Operating Officer at EcoWorld London said ‘and now more than ever it is important that we are supporting new, local businesses that are the heart and soul of the high street.’

Many of the local residents are excited about the initial regeneration plans, Debbie Stafford, 47, from the Aberfeldy Estate says: ‘For the last few years I have felt like Aberfeldy has been left behind and forgotten whilst all around us is being built up and given something.

I would love a high street that I can pop down to and I want my children to be able to stay a little closer to home rather than heading into Stratford or into central just to go to the cinema. It’s exciting to be offered this and a chance to vote on it was lovely too.’

When the Covid-19 pandemic hit in 2020, Poplar HARCA set the plans in motion and commissioned a new art project in a bid to promote and support local businesses.

The murals that covered the entirety of Aberfeldy Street are a homage to the garment manufacturing industry of East London and the designs were inspired by local residents who donated old clothes or textiles. Aberfeldy also invited local pupils from Langdon Park School to design the shop window fronts with help from local artist Matt Ponting, aka Doodling Around, Spotlight.

Townend added: ‘‘The new businesses and completed murals in Aberfeldy Street mark the start of the revitalization and reflect our approach in embracing the local identity and wider community as we continue with our redevelopment plans on our project.’

Last year was also the beginning of the START HERE scheme from Poplar HARCA which offered three retail spaces on Aberfeldy street, rent free for one year and offered the business free and tailored business support. Out of 60 applicants the three that were chosen were the Aberfeldy Front Room, More Life Home and DigiBarber which is the first flagship barber shop for the initial online business.

‘We want Aberfeldy Street to meet the long term needs of the diverse, local community and for it to support local, independent trade. Stride says: ‘The Start Here business support programme and rent free period offered for existing and for new enterprises, are the important building blocks in developing a High Street that can flourish in the short and longer term, building into the new development. We are excited to see the new businesses become part of Aberfeldy’s close and diverse community for years and years to come.’

With many in favour of the plans, a few have  apprehensions. David Frost, 57, has lived in Poplar his entire life and feels the plans will take away what gives Poplar its character.

‘This part of London has always been my home, I remember playing in the launderette on Chrisp Street and I had my first job on the market helping my uncle with his fruit and veg stall.’ says Frost.

‘I understand the need to go forward and improve the area for our kids and grandkids but I don’t want to erase the past, there has and always will be a community here in Poplar and on Aberfeldy, it really doesn’t need to be built. ’

A second round of consultation will be held in spring 2021, with the intention to submit a planning application in August 2021 and Planning Committee January 2022, if all goes smoothly then construction work will begin in laste 2022/early 2023.

The regeneration of Aberfeldy Street has been initially welcomed by the community as Poplar HARCA have promised the existing residents that they will maintain and keep the current community together.