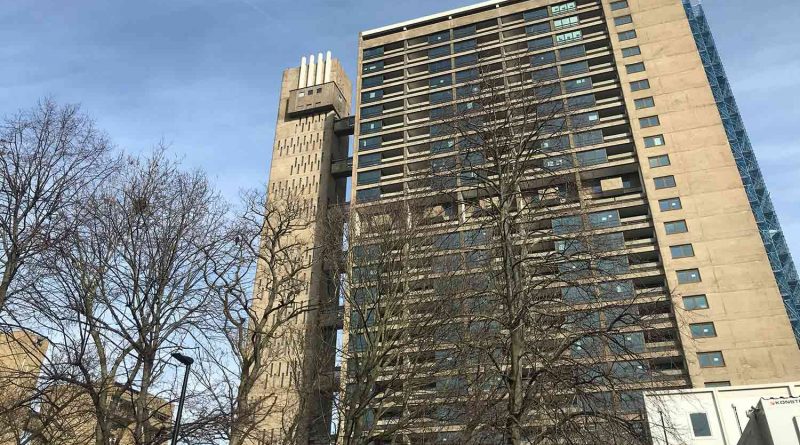 Poplar’s architecture tells the story of the 20th century, from stock bricks to brutalism. Our writer Ruby Flanagan takes you around some of the key buildings of that story and shows how you can trace the progression of social housing design over the last ninety years, from the first world war right through to the early 1980s.

Our walk begins at All Saints DLR station. I had read a blog post written by Andrew Parnell about the architecture of Poplar’s social housing. The piece spoke about the style and the significance of the architecture and I wanted to see these buildings for myself. So I made my way to Poplar.

It’s late afternoon on a weekday in April, it was a warm and bright day and as I walked out onto East India Dock Road the sun was on the cusp of the evening. I turned right and headed down towards All Saints church, the first stop is Robin Hood Gardens, this block of social housing is an iconic building in the genre of brutalism. Designed by husband and wife architects Alison and Peter Smithson in the late sixties and built in the seventies. The design idea behind Robin Hood Gardens was ‘streets in the sky’ as the Smithsons wanted to create a network of pathways.

The building was rejected for a grade listing in 2009 and began demolition in 2017 but  because there are still residents living at the site, it still stands in the year of 2021. It’s such an interesting spot in Poplar and by just standing beside the structure on that April evening taught me a lot about what is happening across the East End. Gentrification is a word that’s thrown about often nowadays but Robin Hood Gardens is a stark example of the notion. The modern, glass new builds with a value of £725,000 that are rising around it is hard to take in.

As I walked away and onto Poplar High Street, I looked behind me and saw the overgrown gardens on top of the large mound that sit before the building, the grass was tall and the nettles were rife. It felt sad leaving, but with the residents still in the building and refusing to leave even with notice posters pinned to the walls, I left feeling that Robin Hood Gardens would be around for a little while longer.

The next stop is the Will Crookes Estate, to get there I walk along Poplar High Street but I decided to cut up Bazely Street to walk through the grounds of All Saints Church on this glorious spring evening, but whilst walking I passed The Greenwich Pensioner pub. It made me pause, the benches outside were full of people, laughing and drinking and there was music pouring out of the open doors of the pub, their pints on the tables reflected glimmers of gold across the street. As I paused, a young man sat on one of the tables outside asked if I was coming in, and I really couldn’t say no.

I wanted to pass Poplar Baths on my walk to the next place, the building is full of history dating back to 1852 and I always marvel at the idea of its age. Heading further down the street the glorious smell of The Pizza Room consumed me, I was tempted to take a perch on the seating that expanded out onto East India Dock road but I was on a mission so the pizza would have to wait. Though it was definitely on the menu for later.

As I walked down Woodstock Terrace back onto Poplar High street I almost felt like you weren’t in the East End. It was golden hour, the light was orange and the yellow flowers that line the hedges of Poplar Recreation ground glowed. The tree’s looked greener than they had looked all year and it was surprisingly relaxing to watch the couple play tennis in the park, the subtle sound of the ball hitting the floor and the racket was quite hypnotic.

The houses to my left look old, like cottages you would see in the countryside, with their chunky wooden doors and shutters. The further I walked away from East India Dock Road the more I heard birdsong and as I passed St Matthias church it got louder. The evening then felt warm and soft, a complete contrast to the idea that people usually have of Poplar and the East End. I was suddenly reminded about where I was when I looked up to see the towering glass skyscrapers of Canary Wharf.

Will Crooks Estate on Poplar High Street was built in 1936, the neo – Georgian yellow stock brick style with redbrick detailing was a common style in this period of history. This style of housing started as part of an effort to improve Islington after World War One and the Duchy of Cornwall, a serious landowner at the time, set out the initial development project.

The programme continued through the interwar period with architect Louis de Soissons designing more Neo-Georgian houses/flats in the 1930s. The development of these flats started after the Sophia Street Clearance Scheme and continued through the ’50s and into the ’70s. Standing in the estate it almost felt like a film set, like a set on the BBC show Call the Midwife, which if you didn’t know, was set in 1950/60’s Poplar.

The next stop was a quick one, Holmesdale House just a little further up Poplar High Street. Built in the later 1930’s, this style of architecture is described as Modern or ‘Moderne’ because the french word was preferred. The solid parapets and elegant curves and horizontal indentations on the balconies looked classy and quiet romantic, their french connotations didn’t look out of place, they blended quite seamlessly into the blossom covered street.

The final stop on our tour of social housing architecture in Poplar is, of course, the iconic Balfron Tower. Completed in 1967, this archetypal triomphe is a staple to the skyline of the East End. Designed by Erno Goldfinger, this building was in development for over 30 years and it’s Brutalist design and striking characteristics have continued in keeping it iconic in the conversation in architecture even today.

Making my way through Chrisp Street Market Square, the stalls were still spread out across the square but they were packing away although there was still a buzz and chatter in the air even as the day was coming to a close.

The Balfron tower can only be described as iconic. Standing 26 stories high over Chrisp Street, The concrete structure was built in the 1960’s and is a key example of the brutalist architectural style. Designed by Erno Goldfinger, and yes, this man was the influence for the infamous Bond villain Goldfinger, these flats were initially social housing, but now the flats are being redeveloped and sold. Thankfully, the building will remain standing.

Poplar isn’t the first place you go to when you think about architecture, but it’s buildings show the history and tell the story of the 20th century which regenerated the area to address the problems of overcrowding, dilapidation, poor sanitation and bomb damage. It’s an interesting walk to do and if you decide check out Poplar’s architecture to take it on, definitely stop by The Pizza Room you won’t regret it.

This article was inspired by Andrew Parnell, who hosts walking tours with Footprints of London.