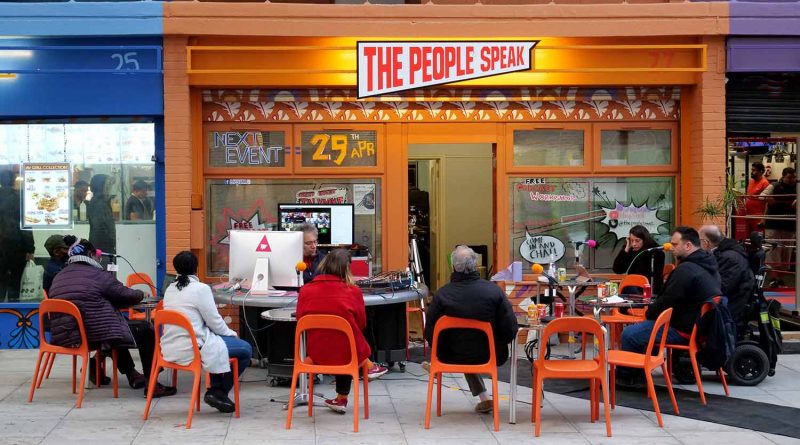 Aberfeldy Live Talkaoke has given the community of Poplar the chance to meet, connect and natter on topics of all sorts, with live visualisations and sound effects that really help to bring a spark to the conversation.

Created by The People Speak, the creative project is an interactive pop-up talk show that aims to help people begin and have conversations by allowing the guests to set the agenda of the chat.

`We never have a theme planned, there’s no booking or anything either, we just invite people who are passing by to join the conversation’ said Mikey Weinkove, Co -founder of The People Speak, ‘the thing about Talkaoke is that it’s pure spontaneity from the unique mix of participants who happened to have joined us that day.’

The guests sit around a dough-nut shaped table with a host placed in the middle. ‘The round table is because we want everything to be on a level playing field’ says Margot Przymierska, an actor who joined The People Speak in 2015, ‘The conversation we want to have isn’t driven by debate or opposites, people may have a different opinion and that’s great, we want people to talk about it. The round table means that there is no hierarchy, no one sits at the head of the table.’

‘We do get some bizarre topics, the most surreal conversation I have experienced was in Norway when the topic turned to downloading your consciousness onto a hard disk . It went so deep, detailed, philosophical and really literal  and it went on for hours’ Mikey laughed.

The People speak have been doing the Talkaoke for over 20 years so far with the first 15 years being spent in Hoxton, but after losing their space Poplar HARCA offered the group a place on Aberfeldy. The duo explained how the community took to the Talkaoke concept like a duck to water.

‘They just accepted that we were there and joined the table! What’s amazing is that the community of Poplar is such a brilliant collection of so many groups, you have a large Bangali community and other international groups, the working class and professional communities, so many different groups come together in Poplar and everyone seems to have something to say’ said Mikey, ‘there is a strong sense of identity in the area that we hadn’t experienced before in Hoxton and it’s been amazing for us as everyone is so welcoming and open, we have built relationships with so many different people.’

The concept of Talkaoke relies on different people coming together so when the pandemic hit in March 2020, The People Speak had to adjust to keep going.

‘As everyone else did, we moved online’ says Mikey. Over the last 12 months Aberfeldy Live! Moved onto zoom and was broadcast over Facebook live but since restrictions have eased the group have managed to set back up at their Aberfeldy Street site.

‘It was great when we did it online’ Margot said, ‘we had the chance to reach out to more people but it also meant that a lot of people who didn’t use or have access to the internet was left out but we got through it and we came back to a beautiful new exterior to the space.’

The People Speak worked with the designers of the Aberfeldy Mural project which painted the entire street with murals paying homage to the East End textile industry.

‘Personally, it’s been a really positive thing for us. The murals have changed the vibe on the street, it feels more social now and people feel more comfortable coming in,’ said Mikey, ‘Especially because we got a new sign designed that asked people to come in and they do so it makes it easier to get people talking.’

If you fancy the opportunity for a natter or a chat over a cuppa or something a little stronger provided by the Tommy Flowers pub a few doors down, than you can join the next conversation live and socially distanced at Aberfeldy Street or you can join in online on the Facebook livestream and on Zoom.

The next Aberfeld Live Talkaoke event has been announced and will be taking place on the 24 June and will be hosted at the People Speaks space at 27 Aberfeldy Street in Poplar.