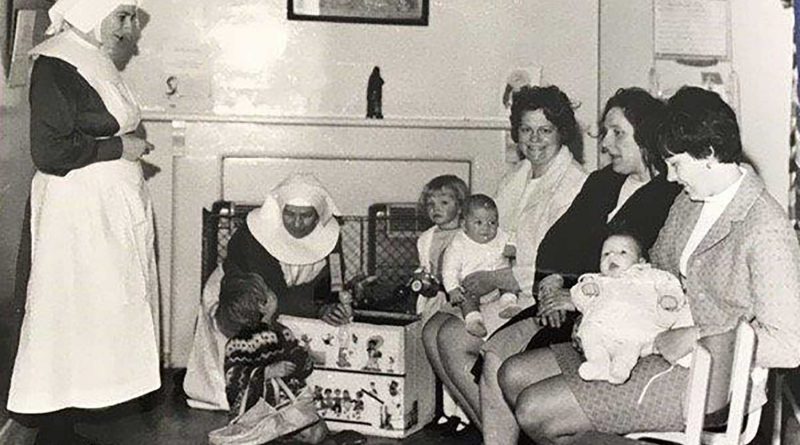 To celebrate ten years of BBC’s Call the Midwife we share the real-life stories of the Poplar residents who inspired the storylines of the award-winning show.

In the show, a convent of religious sisters, along with a handful of young midwives live in a convent house called Nonnatus House in Poplar, East London, and work within the community providing district healthcare and delivering babies.

Written by Heidi Thomas, the concept of the show is based on the memoirs of Jennifer Worth, who herself worked as a young midwife in the 1950s to 60s East End.

The real Sisters were the Religious Sisters of Saint John the Divine and were based at the St Frideswides Mission House on Lodore Street, which still exists.

The Sisters of Saint John the Divine were established in 1848 in Fitzroy Square near Euston and were trained as nurses and midwives in Germany. They have worked in Maternity homes and hospitals across London since then.

The Sisters were invited to Poplar in the 1880s by the Church of All Saints Poplar to work in the East End community; the Sisters accepted and began the work we see in the BBC show.

In the period of the 1950s and 60s, the Sisters and midwives became an iconic part of the East End, with many from the community back describing them as an integral part of life in Poplar.

‘It was exactly like what they show you on the telly, they rode around on the bikes, the midwives in their uniforms and the nuns, and the nuns look exactly the same too’ says Jean Whitelock, now 79 years old, who had two of her five children with the Sisters in 1964 and 65.

‘The young nurse was sitting at the end of my bed knitting, whilst I was having my daughter, she kept turning occasionally to check on me, but it was a long 28-hour labour. She kept telling me not to push and the nun arrived to help and I just couldn’t take the pain anymore and I pushed and they screamed no at me and then she arrived,’ Jean says.

‘My husband was sitting on the stairs outside the flat with my mum and my sons were in bed, and the nurse went outside and asked him if he wanted to see his daughter. All my neighbours were coming back from bingo and they all cheered and clapped.’

Valerie Vanderson, now 73, had her son Darren in 1970 with Sister Monica and her labour particularly with Darren was quite traumatic for her.

‘She was just passing by, we had such a lovely relationship, she popped in for a cuppa and she told me I didn’t look right so examined me and told me I was well on my way’ says Valerie. That happened on Thursday lunchtime and Valerie’s son was born on Saturday morning.

‘She never left my side, not once.’ Valerie’s son was born not breathing ‘Sister Monica picked him up and smacked him and nothing. She picked him up at arm’s length and dropped him onto the bed and still nothing and I just started to panic, she then got a syringe and jabbed him in the back and that was it he finally started to cry.’ Valeria says that she would’ve never have coped without the support from Sister Monica.

Jean and Valerie praised the Sisters and the midwives for the work they did, not just for them but for the community as well. Jenny Brookes’, born in Poplar in 1969, mother worked as a cleaner at the mission house for 12 years between the 50s-60s.

The Sisters helped raise her in the first decade of her life ‘I was taken down Chrisp Street Market by Sister Monica in my pram, and all the nuns came to watch me when I was Angel Gabriele in the Nativity at school, and they were by my mum and dads side when they had to turn off my brother’s life support. They came to the funeral and they never left them. Now if that doesn’t tell you about our community and how much they were a part of our community then I don’t know what will.’

Without exception, the women we interviewed all praised Call the Midwife for its accuracy of the birth scenes as well as the other work the Sisters and midwives undertook in the community. Sharing countless stories, it was clear how loved and appreciated the nuns were in the East End.

They also shared their love for the show ‘Of course we watch it every week’ says Valerie, ‘You’ve got to love Trixie haven’t you?’ laughs Jean.

The only criticism of the show was the representation of Poplar in the early series, the women said that the show made the residents of Poplar look dirty, Jean says ‘We were proud and there was never a person in Poplar who didn’t take pride in themselves or their homes. We worked hard and our homes and ourselves were always as clean as we could be.’

The 2021 series of Call the Midwife saw Poplar enter 1966 with the World Cup in full swing. With the news that the BBC has commissioned series 11, 12 and 13, Call the Midwife will be heading into the 1970s very soon.

‘The ’70s gave us lots of change in Poplar’ says Valerie, ‘I think they will focus on the removal of the slums, and the standard of housing increasing, I think it was the 70s that was the start of the so-called modern era of Poplar’.

Call the Midwife has been beloved by audiences across Britain for the last decade, representing the real lives of real people living in Poplar at the time. What makes this show stand out from many is that many of the community in Poplar cherish their memories of the Sisters and midwives, and can see their own lives and community represented in the show. This is what makes it especially loved in the East End.

Thankfully, the Sisters and Midwives worked around the East End until about 1988, so we can expect there to be a few more series still to come.

If you liked this, you may like Sister Christine Frost minibus campaign.