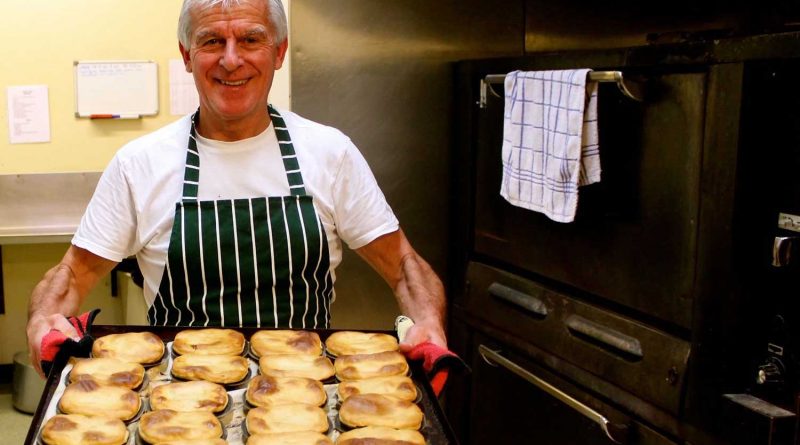 EastEnders Pie n’ Mash is working hard to keep the Cockney tradition of pie n’ mash alive, we chat to the current owners of the shop, Brian and David, about why East Londoners love it, the challenges of keeping the tradition alive and what it really means to be an East Ender.

The East End is home to countless traditional pie shops that have been serving the authentic Cockney classic the same way for generations. Run by Brian Boulter and his son David, EastEnders Pie n’ Mash in Poplar is one of these shops working hard to keep this tradition alive.

‘It’s part of East End Culture, pie and mash, it’s part of our history,’ says Brian ‘it goes back to the dockers’ cos it’s cheap, tasty, and fills you up, if you’re from the East End you will have eaten pie and mash with liquor sauce at some point in your life,’ Brian laughs as leans back in his chair. Brian, the owner of EastEnders Pie n’ Mash was born and raised in Canning Town so knows what it means to be an East Ender.

“I asked the artist to put George Lansbury, the crane, Canary Wharf, and the docks on the mural because they’re a key part of Chrisp Street market’s history and reflect what it’s like today, including a wheelbarrow on the mural was especially important to me’ Brian says ‘I love it and I hope we can move it to our new location’. The current EastEnders patch is planned to be knocked down under the new Chrisp Street regeneration plans but Poplar HARCA has given the pie and mash shop a new space in the market square when it’s complete.

Brian has been at the helm of EastEnders pie n’ mash for around 15 years, although the pie and mash shop has been around since 1976. ‘My friend George had the shop back in the eighties and he passed away and gave the shop to his brother David, who ran it with George’s widow and I then bought in,’ Brian says, ‘Gloria has always been here, she’s been working here for 30 years!’ Brian laughs as he waves across the counter to Gloria who is handing over a plate of steaming hot pie, mash, and liquor sauce to a young man and his daughter.

‘My one has gravy’ the young man shouts to Brian as he is sitting down, his daughter perches next to him with a plate of pie and gravy. ‘Not a proper cockney’ the young man says, ‘but she’ll learn one day.’

The conversation moves onto the notion of community, as a few of Brian’s friends came into the shop and chatted to him as they waited for their food. ‘It’s definitely a community space’ Brian says ‘Some of our customers have been coming here for years, and I mean years.’

‘A lot of our customers are a little older, like me’ Brian laughs ‘but this place people come to chat, to us or with their friends, a lot of my friends come in. We are from the East End we like to chat!’

Brian begins to talk about a few of his regulars, he recalls the details of them, their work, their families, their lives. Brian speaks so warmly of these people, you can tell there is a genuine friendship built from the simple trips to pick up some grub.

‘Of course, I know their order!’ Brian chuckles, ‘pie, mash, and a bit of liquor, it doesn’t change, that’s because it’s the best.’

In 2019, Brian took a step back from full-time pie and mashing and Brian’s son, David Boulter, has taken the reins. ‘I see it as a family business’ David says ‘I grew up in the East End and I’ve been eating pie and mash since I was about two. EastEnders has always been a family business to me so when my dad asked me to take over a few years ago, I just couldn’t say no.’

David and his wife Stephanie are now looking into where they can take the EastEnders Pie n’ Mash shop in the future ‘We sell freshly baked cakes now’ says David ‘my wife is a baker, she used to own a cupcake business so we decided to start doing barista-style coffee and to give the cakes a go, now it seems as we can never make enough, they’re flying out!’ ’

David begins to talk about what he wants to do with the shop over the next few years, ‘We have to adjust to the world we are in, the pandemic hit us hard and Brexit is hitting us too’ says David ‘But we will always stay true to what pie and mash in the East End means, because that’s the most important thing.’

David talks about how the iconic East End delicacy needs to be introduced to the new people moving into the area, ‘It’s a comfort food for the people of the Poplar and the East End and it will never go out of fashion, the traditional recipe has stayed the same for so many years as people love it and it is just brilliant,  We would love people t give it a go, the way you would try the cuisine if you travelled to Spain or Greece, and that’s hopefully what we can achieve, we just want to introduce more people to the wonderful food that we love’.

Although David now runs EastEnders PIe n’ Mash full time, Brian still has his thumb in the pie but now only works Saturdays, David laughs as he says ‘He can’t let the pie and mash shop go completely!

If you liked this, you may like our feature on The real stories behind BBC’s Call the Midwife