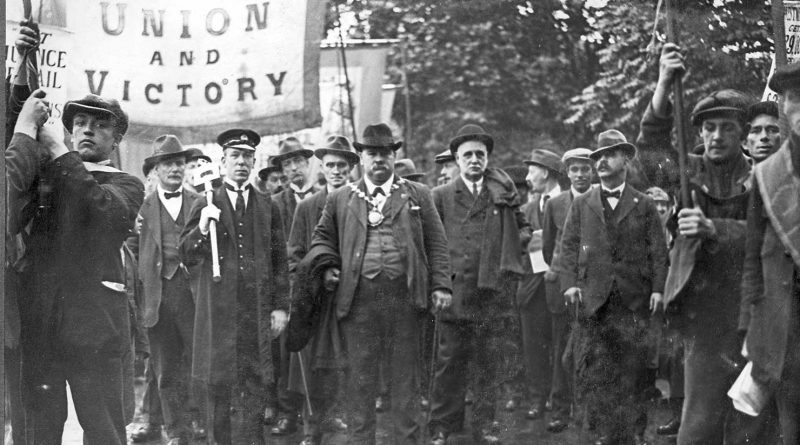 One hundred years after the Poplar Rates Rebellion, a series of events celebrating the ordinary people who fought to change the tax law in the East End.

The Poplar Rates Rebellion is considered one of the most important moments in socialist history, and the George Lansbury Memorial Trust is celebrating this milestone with a series of online events this September.

The two online events, ‘Imprisonment! Poplar Council in Prison 1921’ on the 8th September and ‘The Poplar Rates Rebellion 1921-2021: Who Were the Councillors?’  on 12th September are being hosted to celebrate the real, working-class people who fought for the change to tax law in the East End.

‘The ‘Imprisonment of the Poplar councillors’ event is the celebration of Charlie Sumner, who was arrested and imprisoned on this exact date 100 years ago. He was the last of the thirty Poplar councillors to be arrested after the revolt,’ says Professor Pippa Catterall, Chair of the trust and a Professor of History and Policy at the University of Westminster and the ‘Who were the Councillors’ event is to celebrate all of the councillors who stood up for change’.

The Poplar Rates Rebellion was a tax protest in Poplar, East London. In the early 20th century Poplar was an incredibly poor area and the council rates at the time were based on a ‘rateable value’ deriving from rents. Because Poplar was such a poor borough, property rents and rate incomes were very low.

In 1921, faced with the prospect of a further increase in the rates, the 1919 elected Poplar Labour Councillors decided to not collect the precepts which it should have passed on to four cross-London authorities. In response, the authorities took Poplar Councillors to the High Court.

‘30 Labour Councillors and 2000 supporters, led by Poplar Mayor, George Lansbury marched to court knowing that they were going to be sent to prison’ Catterall explains. ‘These councillors took a stand against injustice, they stood up for their constituents and risked themselves to change the persecution of the poor that had been ingrained into societal norms for hundreds of years’.

The Imprisonment of the Poplar Councillors event focuses on Councillor Charlie Sumner, who was the last of the thirty to be arrested on 8 September 1921. The event is an hour and a half pre-recorded session that features an amalgamation of personal anecdotes from the revolt from Councillors and the community, from letters, diary’s, newspaper articles, court documents, and books. The recording will also feature a musical performance from a member of the Lansbury Family.

‘The entire performance will reflect on the spirit of these people, and why they were prepared to go to jail for their principles.’ says Catterall, ‘It will also explore the community spirit that used to be the driving force of local politics, something that we have lost over the last hundred years.’

The ‘Who were the councillors’ event on the 12th September is a live event streamed on Facebook and will feature a roundtable discussion from descendants and relatives of the Councillors of 1921, where they will discuss the forebears of what they did, explain the personal effect of their actions, how it affected their family and society as a whole.

The roundtable will be chaired by Stephen Timms MP and will feature Chris Sumner, the grandson of Charlie Sumner. ‘My grandfathers were part of the rebellion and my mother was 11 at the time remembered the infamous photo of Minnie Lansbury and the women who went to grab her hand’ Chris explained, ‘It’s a big part of my life, this event as well as being a part of history,  and my heritage.’

Sumner and Cattarell believe it is important that we work to remember moments like this in history especially instances like the Poplar Rates Rebellion, ‘It seems to have been pushed under the rug this tiny slice of the 20th century,’ Catterell explains ‘We are still experiencing instances like this right now, 100 years later. This is why we need to teach people that people have pushed against this before and we can do it again.’

The George Lansbury Memorial Trust has already hosted real-life events in the past at Popular Union and Bow Church but moved online due to the Covid-19 pandemic.

‘This is an incredibly important piece of social history, which shows how ordinary people changed a system, they change an unfair system by careful planning and sheer determination and acting collectively and bravely’ says Chris Sumner, ‘they refused to obey the rules, they refused to obey the laws that they considered to be unjust and unfair and acted to do something about it.’

Have some stories about the Poplar Rates Rebellion? Contact The George Lansbury Memorial Trust and let them know.

You can sign up for the free online events on Eventbrite.

If you liked this, you may like The real stories behind BBC’s Call the Midwife