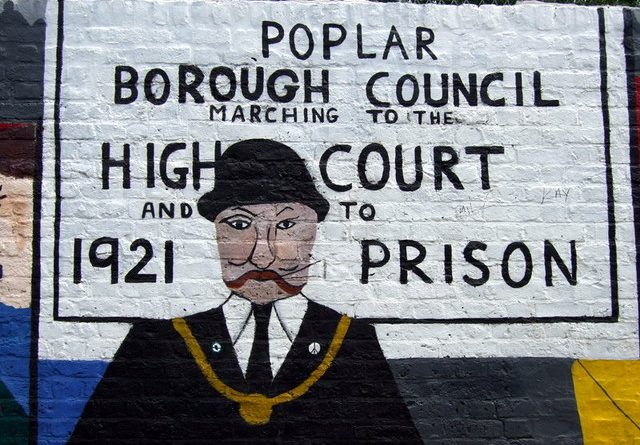 In honour of the centenary of the Poplar rates rebellion, Tower Hamlets council has added a fresh lick of paint to its commemorative mural.

The council has preserved the brick wall underneath and erected a heritage panel in Poplar Recreation Ground telling the story of the Poplar rates rebellion.

The mural on Hale Street features the names of the 30 Poplar Borough councillors who went to prison after refusing to collect a tax levy on the poor. The “poll tax” contributed to London-wide services while the cost of supporting the poor in the East End was not shared with wealthier boroughs.

“It is important to keep this significant part of our borough’s history alive and remind present and future generations of the huge personal sacrifice made by many in defence of their local community,” Tower Hamlets mayor John Biggs said.

Originally painted in 1990 by Mark Francis, the mural includes references to the campaign to abolish the Thatcher-era poll tax. In the centre of the mural, the Labour mayor of Poplar George Lansbury who led the rebellion is depicted wearing his mayoral chain of office, flanked by protestors with placards reading ‘Can’t pay, won’t pay.’

Five women councillors were arrested, including pregnant Nellie Cressall, and Lansbury’s daughter-in-law Minnie who died at 32 after developing pneumonia from her imprisonment.

After the public organised marches and gathered outside the prison walls to show their support, neighbouring councils Bethnal Green and Stepney also voted to withhold the levy. The government eventually agreed to release the councillors and passed legislation to redistribute taxes more fairly.

In September this year, the mural was once again a spur to political action, when housing campaigners marked the centenary by protesting the shortage of affordable social housing.

If you enjoyed this, you may like The reason why we need to remember the Poplar Rates Rebellion.