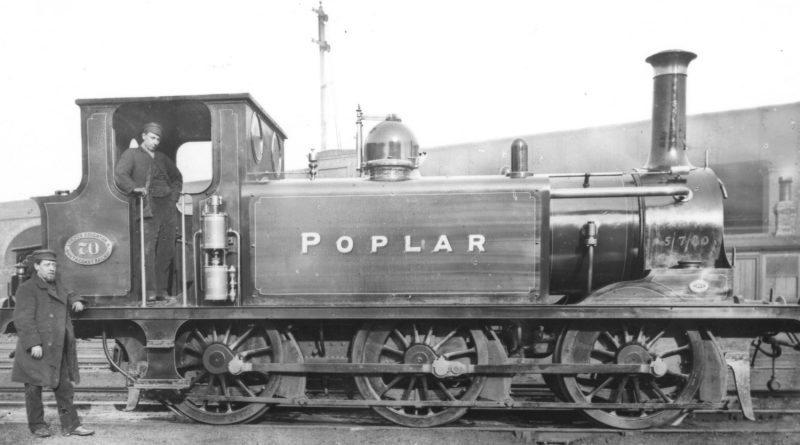 The No.70 steam locomotive, ‘Poplar’, is returning to its East London home for a weekend of educational activities to mark its 150th birthday.

A newly-restored Victorian steam engine is returning to its home in Poplar this week, for a series of events to mark the locomotive’s 150th birthday. The No.70, ‘Poplar’ will be on display to school groups and the public at the DLR’s Poplar depot from 15-22 June.

The Victorian locomotive, one of the first batch of Terrier engines, was built in 1872 by the London, Brighton and South Coast Railway, and in line with the railway’s policy, the engine was named after the area it served.

For the first 30 years of its life, ‘Poplar’ carried early commuters on the railways of London, including the Victorian workers who manned the Beckton Gas Works.

But by the turn of the century, ‘Poplar’ was too small for many of the duties of an inner-city railway, and in 1901 it was sold to the Kent and East Sussex Railway (K&ESR) for £650. It was re-named as No.3 ‘Bodiam’, and continued in service right up till 1963, when it was saved for preservation by the K&ESR.

While ‘Poplar’ itself had moved onto greener pastures, steam trains remained a common sight in London up until the 1960s, with even underground trains pulled by coal-fuelled locomotives.

Bob Rogers of the Newham History Society recalls seeing the steam trains as a child in Poplar in the late 1950s. “My mum would take me down to Poplar High Street and we would walk down a narrow alleyway next to Shaws and over a little brick bridge. There was this lovely Railway, the PLA Millwall Sidings, steam trains everywhere!”

He later moved to Canning Town, and “spent many happy hours on ‘Peggy Leggy Step’ watching the steam trains, including the Coal Trucks, going into Canning Town Power Station.”

The original Poplar Station was opened in 1840 by the London and Blackwall Railway.  Located on what is now a slip road to Aspen Way, adjacent to Blackwall DLR station, it closed in the 1960s as the Blackwall line fell out of use.

No.70 ‘Poplar’, would have visited the station in its heyday, and now, after a £150,000 restoration project, it is returning home.

There will be an official renaming ceremony at the Poplar depot, and throughout the week, local school children have been visiting the engine as part of history lessons on how the railway transformed Britain.

Robin White, Trustee of The Kent & East Sussex Railway, said, “It is a privilege and a pleasure to bring ‘Poplar’ to the capital and to make a connection with the people of London and young people of Tower Hamlets in particular.”

Tom White, Chairman of The Terrier Trust, was equally delighted to bring ‘Poplar’ back, and to provide local people with ‘the experience of seeing and touching a real steam locomotive named after the area in which they live.’

‘Poplar’ is on display for public viewing from 10am-4pm on Saturday 18th and Sunday 19th June, with visitors given the opportunity to climb aboard the cab and handle the locomotive’s control. To book a time slot, click here.