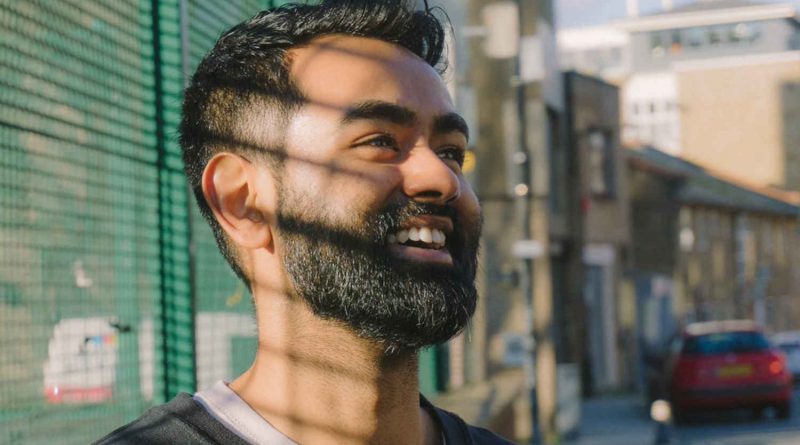 Rahemur Rahman, the first Bangladeshi fashion designer to show at London Fashion week, on why he dedicated his last collection to his father and other rag trade workers.

“All of my garments have a Poplar seed in them, so that when the apocalypse comes and all the natural fibres decompose, that seed will have a bed of soil and it can grow,” Rahemur Rahman says.

At first glance, Rahman seems like the last person who would fret about the apocalypse. His wide smile lights up his face like a lantern, and he talks so excitedly his words bubble out of his mouth to the rhythm of his breath.

But Rahman knows how to use hardship to seed growth. Six years ago, he left East London after his family stopped speaking to him when he came out as gay, and he only returned at the beginning of the pandemic.

“I didn’t want to run away anymore,” he says firmly. “And I’m never going to leave again.”

Over the last six years, Rahman became the first Bangladeshi fashion designer to show at London fashion week, and he now teaches at Central St Martin’s, one of the best fashion schools in the world.

But back in East London, his past surrounds him. “When I got suspended from school, I did a stint at a pupil referral unit right around the corner,” he reminisces while sitting in his spacious, brightly-lit studio at Poplar Works.

Rahman embraces every part of his identity, past and present, giving him a serenity which is infectious to be around. “I’m still in the Bengali community and I’m still very much Muslim,” he says. “But the second I came out and came into my own, everything I was doing really flourished.”

Children of the rag trade

Despite their strained relationship, Rahman dedicated his last collection to his father who worked as a tailor in the rag trade, the immigrant-run clothing manufacturing business that provides cheap labour for the fashion industry.

“When my dad came to Brick Lane, they would make a mezzanine in the house and put sewing machines on every level. There would be a narrow little bed where they would all sleep, and it would be a 24 hour sweatshop,” Rahman says.

Rahman remembers his parents warning him never to get too comfortable, always fearing the flat that housed their family of 11 could be taken from them in an instant.

“It’s because of the way they were treated in the UK,” Rahman says. “I grew up seeing my dad and his friends go out to fight racist white people who were trying to throw stones and spit at us as we were coming back from school.”

“I still get that feeling, like I’m always on the edge of everything disappearing, and my friends from the area feel it too.”

Researching the working conditions of the rag trade gave Rahman and his friends a deeper empathy for their parents.

“When we were children, we would have to translate letters for them, or take them to the doctor. We almost became carers,” Rahman says. “But they didn’t have time to learn the language, they were just trying to put food on the plate.”

“We all had a really emancipatory feeling realising we’re just children of the rag trade and we need to celebrate that, because we have a different lived experience.”

The collection uses fabrics block printed with natural dyes by artisans at Aranya in Dhaka, Bangladesh.

“I’m trying to change what made in Bangladesh means,” Rahman says. “We have this Eurocentric idea of craftsmanship, like everything has to come from Italy. But actually, Gucci get all their embroidery done in India, most brands get their work done in South Asia.”

Using fabric offcuts Aranya has been saving for decades, Rahman made a patchwork textile of archival block printed scraps, artfully sewn together with seams zigzagging across the hem and falling in a half moon shape across the small of the back.

His block prints on tailored denim ripple like reflections on water, a geometric print which was bought by the V&A museum for their archive.

Bringing fashion to the community

A series of mentors aided Rahman’s ascent in fashion, which began when he stumbled into a workshop at the Brady Arts Centre when he was a teenager.

But the redevelopment of the Isle of Dogs and Poplar has swept away many of the community spaces and youth clubs Rahman found so vital.

“Everything that I grew up seeing that I loved is no longer there, the youth clubs, playground areas, little bits of green. And we just get used to it,” Rahman says.

“I think what has been lost is a sense of community, and they’re trying to rebuild it through a very capitalistic lens,” Rahman says, referring to the meanwhile community spaces set up as placeholders for commercial development. “I don’t know how they expect community projects to have longevity if they’re not planning them to have longevity.”

Rahman believes people need to be encouraged to aim higher. “My dad always said that when I finished at St Martin’s we should open up a tailoring shop on Brick Lane,” he says. “For him, that was the highest point. Nobody in those factories was ever told they could be a designer.”

Being the first Bangladeshi fashion designer at London Fashion week was a bittersweet landmark for Rahman.

“It’s mad to think I was the first in 2019, when the Bengali community pretty much made the fashion industry to begin with, through being very cheap slave labour,” Rahman says.

Rahman’s heritage and lived experience of Poplar and the Isle of Dogs helps him to empower local people through practical and collaborative workshops.

“I did this project once which worked really well,” Rahman says. “Not only was it a sewing circle, but I also taught the women how to do tax and invoices. They make clothes for people, but cash in hand. They already know how to run a business, they just don’t understand the formalities of it all.”

“For me, the problem with some community projects is that they remove people’s autonomy and agency. I think it should be like school, where somebody gives you the power to support yourself.”

Having forged a path for himself as a working-class Bengali designer, Rahman can now use his privilege to help diversify the fashion industry.

“If I hadn’t gone through everything I’ve gone through, I wouldn’t be able to open the doors that I can now,” he says. “And now that I’ve opened the door, it’s like, Everyone, come in!”

If you liked this, you may enjoy A day in the life of Asma Begum, sewing teacher at More Life Home.