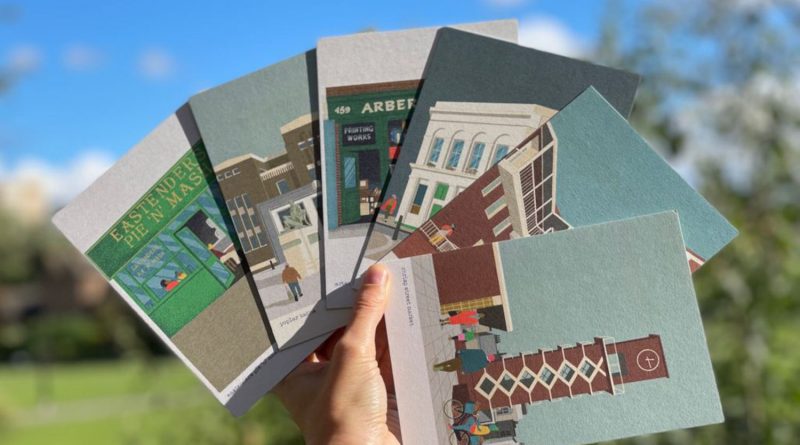 Artist Paolo Fiorentini made postcards of Poplar’s most iconic local landmarks to inspire pride in the area.

“Someone bought the postcard of the Eastenders Pie n’ Mash shop who had ‘pie and mash’ tattooed on his fingers,” Paolo Fiorentini laughs.

Fiorentini, creative director and curator of Poplar Union, drew some of Poplar’s most recognisable landmarks and published them as a series of postcards that pay tribute to this corner of the East End.

“I wanted to draw places people would recognise to counter the stereotype that Poplar is a place people don’t really know, trapped between Canary Wharf and Bow,” Fiorentini says.

This particular drawing also preserves the memory of one of Fiorentini’s favourite places in Poplar. “Eastenders Pie n’ Mash is probably going to disappear with the plans to redevelop Chrisp Street,” Fiorentini laments.

He also drew more historic landmarks, such as Chrisp Street market’s distinctive clock tower, and the art deco Poplar Baths, all edited using the Procreate app on his iPad.

“A place doesn’t need to be beautiful in a stereotypical sense, it can simply be a place you recognise and it deserves to be remembered just for that,” Fiorentini says.

“The Pie n’ Mash shop is a very simple shop, but it’s iconic because people recognise it and know the owner,” Fiorentini says. “Putting it together with something like Poplar Baths shows they have the same value.”

Creating a bank of local landmarks also has a practical appeal for Fiorentini.

“Poplar is very disconnected, it’s difficult to navigate if you’re not used to it,” he says. “We get phone calls every single day at Poplar Union from people who can’t find us and we have to describe where we are.”

“A local teacher bought every single design,” he says. “She said it’s the first time she’d seen Poplar in an illustration and she felt very proud.”

If you enjoyed this, you may like our feature on Eastenders Pie n’ Mash: Keeping the Cockney tradition alive.