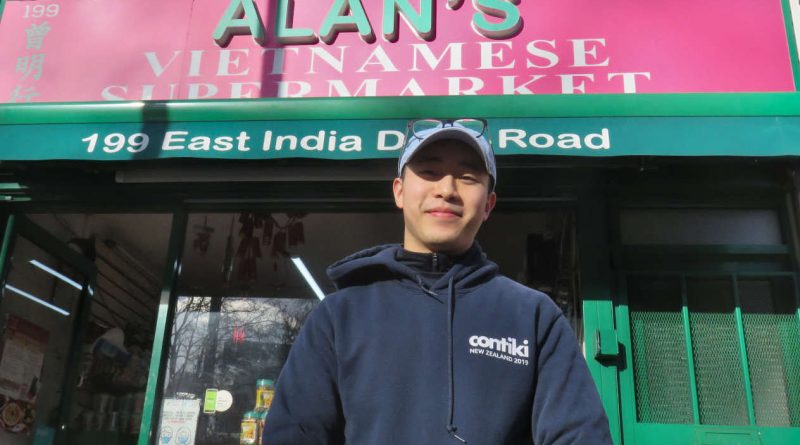 Why Alan Nguyen left his career as an accountant to run the family shop set up by his parents 23 years ago after they fled the Vietnam War.

Alan Nguyen grew up living above Alan’s Vietnamese Supermarket on East India Dock Road, cheekily grabbing the snacks that glimmered all around him.

“All the vegetables and stuff that don’t sell to customers we just cook upstairs,” he says. “There’s no separation between work and home, that’s why work doesn’t feel like work, it just feels like I’m helping the family out.”

Alan’s parents set up the supermarket twenty-three years ago, after fleeing the Vietnam war and emigrating from a town near Hanoi to the UK in the 80s.

In March this year, Alan and his sister Nina, who has been involved with the family business for the last eight years, took over the shop from their parents.

The transition was gradual since Alan’s family didn’t let his mum work during the pandemic, though his parents still live upstairs and lend a helping hand when they can.

As you walk into the shop, a Buddhist statue gleams above the stock cubes and spices, inviting yet another generation into the family home and business.

“It’s to pay respect to my mum’s grandparents, we refill the cups of water and light an incense stick and pray to them for good fortune, wealth, and to protect the family’s health,” Alan says. “Our relatives are always around.”

Taking over the family business

Alan’s name has been on the shopfront since he was only a year old, but he didn’t have any plans to take over the family business until recently.

After graduating from the University of East Anglia in 2020, he spent three months working as an accountant.

“It was a lot of pressure, and the structure of a corporate workplace is quite daunting, it makes you feel very small,” Alan says. “There wasn’t a lot of creativity in it, and with accountancy, even if your work is great you don’t get any feedback on it.”

After quitting his job, Alan worked on the shop floor of the supermarket for a few months while he planned his next steps.

“I wasn’t really enjoying it, I wanted separation from my family and independence,” Alan says. “But when I started working on making a website for the shop, loads of ideas popped into my head, and the creative side of me came through.”

Alan is full of plans to modernise the business, and he and his sister have already put the shop on Ebay, Amazon, Deliveroo, Hungry Panda and Uber Eats.

“Everything here used to be on pen and paper,” Alan says. “Even the card machine is new, we were all cash before, proper old school.”

Alan wants to open a new store in Poplar, and after putting the shop on Instagram earlier this year, he started sending boxes of ingredients to influencers and food bloggers to inspire people with recipes using their goods.

But he believes what really sets the supermarket apart is the customer service.

“In old school Asian supermarkets they don’t really care about customer service, it’s just about money, buy your stuff and leave,” he says. “I will carry people’s bags to their car or tape up boxes for them and go that extra mile.”

A hub for East Asian culture

Part of Alan’s vision for the business is to educate people about East Asian culture, by teaching them about the origins of their ingredients through blogs or cooking classes.

Alan was one of the only Vietnamese students at Chobham Academy in Stratford, where he did his A levels.

But he went to a Vietnamese community school during the summer held in Calvary Charismatic Baptist Church, where he did language classes and met other Vietnamese kids in the area.

“It wasn’t an extreme feeling of being a minority, because I’d always see Vietnamese people coming into the shop and speak Vietnamese with them, so I wasn’t isolated,” he says.

Alan’s experiences helping his parents navigate living in the UK with limited English primed him for taking on the responsibility of taking over the business.

“I’d have to do bills for them, go to the bank, sort out documents. It makes you mentally older, because you have to be there for your parents, they rely on you,” he says.

Alan remembers first starting to pick up extra work from his parents when he was a teenager.

“For the whole summer I went to the meat market in St Paul’s, the vegetable market in Stratford, and Billingsgate market for fish, starting at around midnight and coming home at 6am, to save up for the new Xbox console,” Alan reminisces.

Alan’s work ethic is still unwavering, though now he isn’t motivated by an Xbox, but by his determination to innovate his parents’ legacy.

“I have purpose in life and I’m very grateful for it, a lot of people don’t find at this age what they want to do, and now I can work on it forever,” he says.

“There’s no words to really describe how I feel about it. All I can say is, this is amazing.”

If you liked this, you may enjoy our feature on Rahemur Rahman: Child of the Rag Trade.