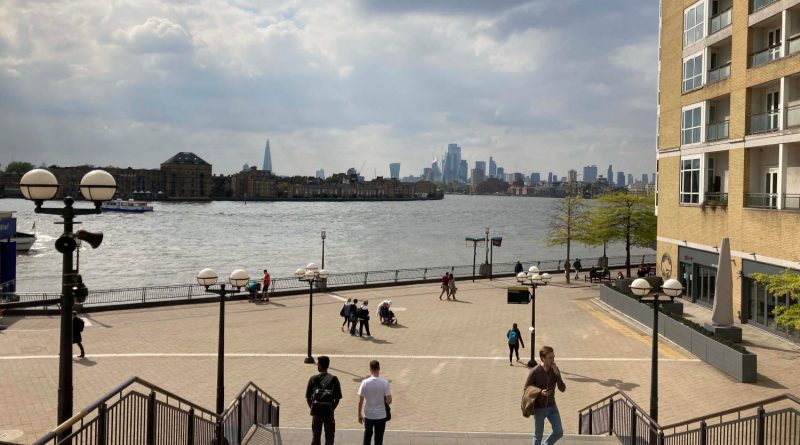 Among the glass towers and shopping malls, the Isle of Dogs hides a fascinating history. Take a walk down the leafy Thames Path to discover the Island’s past, present and future.

‘The next station is: Canary Wharf’.

As the driverless train glides gently to a standstill under the broad, glass-panelled roof of Canary Wharf Station, you’d be forgiven for thinking you’d stumbled upon another world.

With the DLR pulling away, I was swept up by a crowd of bank holiday shoppers, into stretching malls of bubble tea clutching teens and Dior handbag stores, emerging in the pristine plazas of Canary Wharf.

It’s an unlikely beginning for a walk rich in history, but as any Isle of Dogs resident will tell you, there’s much more than skyscrapers and shopping malls to this part of London.

The Island, as it’s known by locals, is a land of contrasts: towering monuments to modern finance sit beside relics of the area’s industrial past. Historic feats of human engineering are cradled by the brute force of nature, a powerful river that carved this stretch of land into existence.

And among it all lie thousands of homes, from Victorian terraces to brutalist blocks, post-war estates to modernist masterpieces. There can be few walks in London with such variety.

As I began my walk down the Thames Path, leaving the shimmering office blocks behind, the contrast was instant. Just a stone’s throw from the station exit is the historic No.1 Warehouse – one of the only remaining Georgian warehouses at West India Quay.

Opened in 1802 as a depot for the East India Company, it now houses the impressive Museum of London Docklands, which explores the area’s fascinating history. The museum itself is well worth a visit, but today I was here for the walk.

Joining the Thames Path at Westferry Circus, the river bends off before you towards the heart of London: the Shard, the Gherkin and the Walkie Talkie skyscrapers tower on the horizon. A parade of cafes lines the riverside, and on this sunny bank holiday Monday, the terrace is alive.

I followed the path south around the curve of the island, where a series of quirky post-war apartment blocks line the riverfront, their shapely experimental architecture in stark contrast to the straight-edged skyscrapers behind.

On the river wall a small plaque commemorates 40 people killed when an air-raid shelter at Bullivant’s Wharf took a direct hit in 1941. It’s a timely reminder of the brutal bombardment this area suffered during the Blitz, and the reason for its wealth of new-build architecture.

Following the path, you reach Sir John McDougal Gardens, a spacious, grassy park that overlooks the river. It’s the perfect (if a little breezy) spot to rest and watch the boats go by.

In the late 17th century, seven windmills were built on this stretch of river, taking advantage of the strong westerly wind that blew over the Island. They gave the western part of the Isle of Dogs its name, Millwall, but were abandoned and demolished by the 19th century as the steam engine replaced wind power.

At this point, the Thames Path is forced inland and onto Westferry Road. After passing the Docklands Watersports Centre, I arrived at a curious old church, quite out of place among the post-war housing.

Built in 1859 by a Presbytarian mission, the striking brick building is now home to The Space, a popular theatre and community venue. A glance at the programme reveals an exciting schedule of events, but on this sunny afternoon, a pint at the bar is all I’m after.

“It’s haunted, you know”, the barman tells me, polishing glasses as he surveys the bar. “Late at night, when the audience has left, a priest has been seen walking the gallery of the theatre.”

Ghostly priests aren’t the only relics of the past in this neighbourhood, and after finishing my drink I weaved between the newbuild flats to rejoin the Thames Path.

On this stretch, legacies of the Island’s industrial past are everywhere to be found. The Isle of Dogs was once a major hub for shipbuilding, and at Napier Avenue lies the old launch site of the SS Great Eastern, in its day the largest ship ever built. The wooden beams that were used to slide the ship into the water in January 1858 lie on the grassy bank.

A short walk further is Burrell Wharf, now a sleek residential unit, but once a famous colour works. Built in 1888, the factory initially produced paints and printing inks before shifting to the production of pure colour. In its gloomy workshops, piles of coloured pigment glowed like heaps of jewels, plumes of coloured smoke billowed from the chimneys, and pigeons with pink-tinted feathers sat on the roof tops.

Following the bend in the river, the masts of the Cutty Sark and the elegant Royal Naval College in Greenwich come into view on the river’s south bank. For a great view of both, I clambered onto the small sandy beach at the Poplar, Blackwall and District Rowing Club, Thames Clipper ferries zipping up and down the river before me.

The rowing club slipway was once the landing point for the Greenwich Ferry, and was served by the Blackwall Railway. A minute’s walk from the river, the old railway viaduct comes to an abrupt end on Manchester Road, another reminder of a period in the Island’s history lost to time.

I traced the river on through leafy Island Gardens, where the Greenwich foot tunnel connects North and South London, past converted warehouses, housing estates and swanky riverside flats, to my end point opposite the O2 Arena. Looking out across the Thames, you can’t escape the history this patch of land has seen.

Heading back towards the station, the futuristic skyline rises up from amongst the docks and houses. Much like the docklands before them, they are a marvel of engineering, maligned by some but an enduring symbol of modern London.

This stretch of river might not boast the quaint villages of Oxfordshire, the riverside pubs of Richmond, or the grandiose architecture of Westminster, but it has something else. It is unmistakably urban and engrossingly alive: the heaving artery of a city brimming business, culture and history.

The contradictions and contrasts of London are what makes it unique, and as glinting skyscrapers rise over Victorian terraces, the mighty river looping before them, this city is more fascinating than ever.