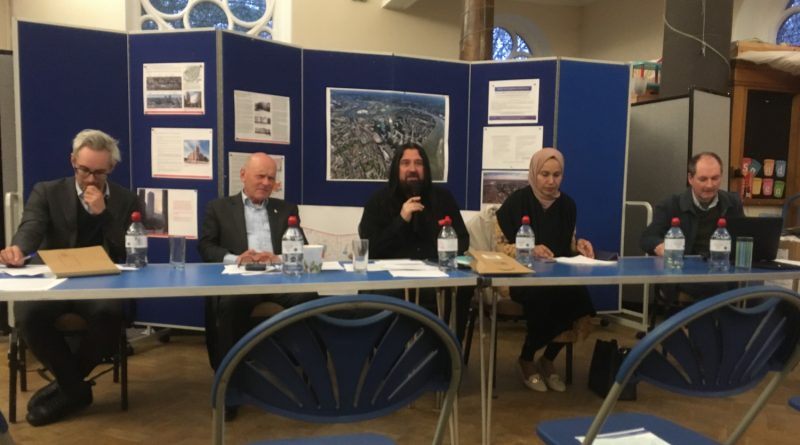 With local elections around the corner, speculation has grown that national politics will shape the vote. But for Poplar residents, it’s clear that local affairs are top of the agenda.

On Thursday 5th May, voters across the UK will go to the polls in local elections. The vote is being seen as bellwether for public feeling towards national political parties, whose performance in recent months will be put under the microscope.

Election build-up has been dominated by issues including the Partygate scandal, the cost of living crisis, and the war in Ukraine, leading many commentators to suggest that national affairs will inform the vote.

But at a pre-election debate at St Matthias Church in Poplar, it was clear that local issues are top of the agenda.

The debate was attended by incumbent Labour mayor John Biggs, Rabina Khan of the Liberal Democrats, Elliott Weaver of the Conservatives, and Independent candidate Andrew Wood.

Housing was high on the agenda, with voters giving short shrift to the suggestion that shortages are part of a national problem.The candidates agreed on an urgent need to build new affordable homes, as well as renovate the borough’s existing social housing.

Local residents spoke powerfully about poor living conditions in Tower Hamlets, with one woman describing a home wracked with damp and infested with mice. This, she said, was a problem for local government.

The question of adult social care also featured heavily in the debate. Sister Christine, a prominent local campaigner and founder of the charity Neighbours in Poplar, spoke passionately about the dedicated work of volunteers supporting vulnerable adults in the community.

She expressed her frustration at the poor provision of social care across the borough, and pressed candidates to improve support services.

A local community worker invited the candidates to join her on home visits, to see the harsh reality for the borough’s most vulnerable residents, an offer that was accepted by all.

The elephant in the room was the absence of Aspire candidate Lutfur Rahman. The former Mayor of Tower Hamlets was removed from office in 2015 after allegations of voter fraud, and banned from standing for five years.

With his ban now expired, Rahman is standing for re-election, but has declined to attend any of the pre-vote debates. His absence was roundly condemned by his fellow candidates, who criticised his failure to face up to voters.

The evening ended with a discussion of pollution in Tower Hamlets, with air quality a particular point of concern. Electric vehicle charging points, cycle lanes, and pollution reducing plants were among the proposals put forward, with candidates agreeing on the need to take positive environmental action.

As local residents drifted off into the night, the candidates were left with a clear idea of the challenges they will face as mayor, and the issues that will define Thursday’s vote.

In Poplar at least, this election will be fought on local grounds.

To find your local polling station, enter your postcode at Where Do I Vote