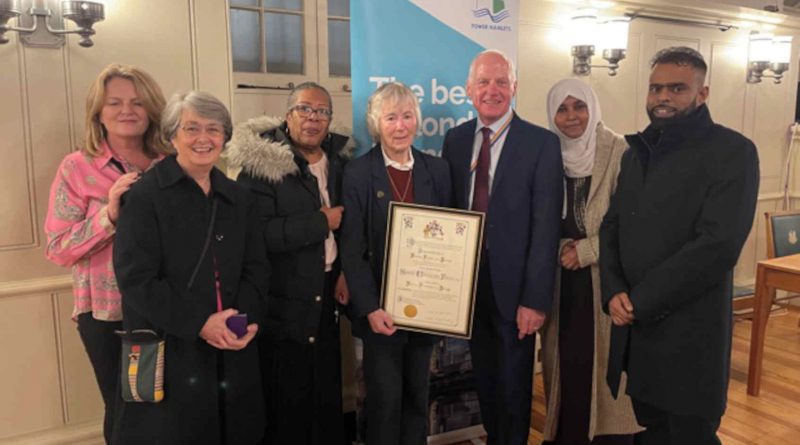 Sister Christine reflects on her fifty-one years of charitable service in Poplar after winning the Tower Hamlets Freedom award.

This October, Sister Christine Frost was given the Tower Hamlets Freedom award at a ceremony in the Tower of London, recognising her decades of work supporting vulnerable and isolated people.

She was nominated for the award by the public alongside four other inspirational figures in the borough, including East London Mosque’s Sufia Alam and former Poplar and Limehouse MP Jim Fitzpatrick.

During the pandemic Sister Christine Frost and her volunteers cooked and distributed meals, ran a food bank and arranged vaccination trips.

But Sister Christine’s service in Poplar started long before lockdown — she first set up Neighbours in Poplar in 1969 to support families in poverty, reduce loneliness and create a sense of community.

“The award ceremony was rather like being at your own funeral, with people saying really nice things about you,” 83-year-old Sister Christine jokes.

“It was for the past 51 years of work [I’ve done] in the borough, and for trying to include everybody. I’m not there for one religious group, or one cultural group, I’m there to try to bring the community together.”

Sister Christine persuaded Canary Wharf businesses to donate food and gifts at Christmastime to Neighbours in Poplar, and was previously awarded an MBE for her community work.

In September, SPLASH marked the centenary of the Poplar Rates rebellion by protesting in front of the mural of the 30 councillors who went to prison instead of imposing a tax levy on the poor.

“I’m privileged to live in a small one bedroom flat on Wilcox estates, and my rent is something like 420 a month,” Christine says.

“Upstairs is a family of two adults and three children in an identical space. So they have bunk beds in the living room, and because it’s privately rented, it’s £1,300 a month. This winter, people on my side of the road — across from Canary Wharf — will be choosing between heat or eat.

“The protest was really a reminder to today’s councillors, today’s MPs. Would any of them risk going to prison on behalf of people like us? I’m not sure. That’s the kind of passion we need back again.”

If you enjoyed reading this, you might like Sister Christine Frost MBE walking 500 miles for a new minibus.