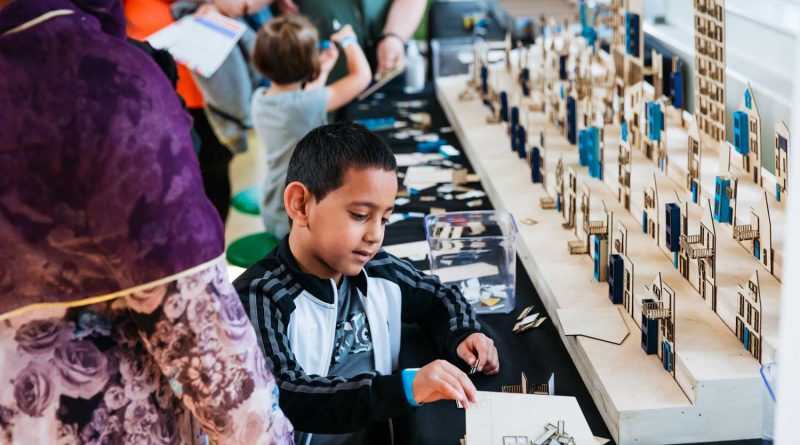 With the majority of local residents backing proposals for the regeneration of the Teviot Estate, Poplar HARCA and Hill Group are leading the way in community-led urban design.

We all know that revitalising districts that are in decline is a complex, long-term business. Successful urban design isn’t just a matter of creating shiny new housing that looks good in brochures. It must also deliver more and better-designed affordable housing, improved green spaces, and investment into existing services and infrastructure investment.

The most forward-thinking place making projects are also investing in enterprise schemes to build the foundations of long-term prospects of the local economy. And the very best schemes ensure existing communities are not pushed out but rather are placed at the heart of the design process, bringing their own local knowledge to the table.

One example of how this kind of urban regeneration is done well is right here on our doorstep in Tower Hamlets. Housing association Poplar HARCA and developers Hill Group are working on the redevelopment of the Teviot Estate in Poplar.

You would not be blamed for not quite being able to place the Teviot Estate as it’s tucked away between some major infrastructure. If you’ve walked along the Limehouse Cut toward the Bromley-by-Bow Tesco you may have caught sight of it as you glance to the south just before walking under the A12. Part of it lines the A12 opposite Poplar Works, the fashion studio also set up by Poplar HARCA, the London College of Fashion, UAL and The Trampery.

On paper the scheme is wide-ranging. It wants to deliver circa 1,750 new homes, create new green spaces, new shops and new infrastructure. What is more impressive though is the community engagement the scheme has already attracted. There was an 81% turnout of residents in the Teviot Estate to vote in a ballot on the proposed regeneration and of those 86% were in support, showing that the plans have been made in response to local need.

Looking more closely at the proposal it’s not hard to see why there has been such widespread support – it is delivering a number of initiatives that will offer tangible improvements to the quality of life of local residents, improving not just their lifestyles but also attracting visitors to the area.

As part of the proposal, Tower Hamlets Council, Manorfield Primary School and Poplar HARCA are working together to improve the canal and green spaces. Physical changes to the environment such as a cycling hub and the opening up of green spaces, are intended to encourage exercise and play, better connect cycling and walking routes and bring people together.

Plans for a new pontoon, with storage for boats and equipment, aim not only to revitalise activity on the canal, but highlight the existing connection the canal provides with Bartlett Park and Olympic Park. Funded by London Marathon Charitable Trust, with match funding from Poplar HARCA and Hill as part of their Teviot social value programme, it will also include teaming up with Thames 21 to clean up the canal and plant reed beds, encouraging more wildlife and making the area more picturesque.

Improvements to the little green at the centre of the estate will include creating family-friendly grow beds and boxes, child-friendly wildflower space and a community greenhouse to grow herbs that the estate’s café can use.

A multipurpose mobile vehicle will become the focus of the green, offering coffee and food but also the potential to welcome popup services including a GP service, library and healthy ice cream van. The ultimate goal of the improvements is to realise improved community health and wellbeing.

With only 535 homes currently offered within the Teviot regeneration area, this will see a potential increase of 1,000 homes in Tower Hamlets. With at least 35% of these as affordable housing, and an aim to provide more, this scheme will provide much-needed affordable housing for East Enders. All eligible residents who want to stay living on the Teviot Estate are being given the option to do so.

Designed primarily for the benefit of existing residents, the Teviot Estate looks likely to become a sought-after corner of East London delivering what is most important in life – community.

You can find more information about the future Teviot regeneration proposals online:

Tabitha Stapely is the founder of Social Streets, a not-for-profit media company using journalism to strengthen communities, particularly those in disadvantaged or neglected areas. Prior, Stapely was a writer and editor for national titles including The Telegraph, Elle and Red magazines.