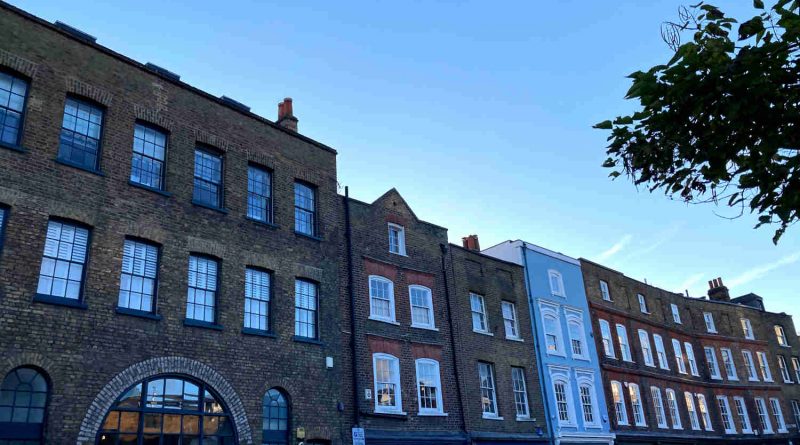 It is the details of Narrow Street that enchant me: lampposts patterns carved into their wrought iron; a tiny door knocker of a Ripon hornblower; lettering carved into stone along the canal.

Three Colt Gallery’s bright blue shopfront catches my eye, and I peer into the gift shop window at sparkly earrings, soaps and other knick knacks worthy of Christmas presents.

Across the road a woman in a long coat does a circuit around the autumn trees of Ropefields Park, meandering onto the Limehouse Cut with her pram.

Formerly, the canal was packed with cargo ships, and Limehouse was home to Chinese sailors who set up London’s first Chinatown with restaurants, gambling and opium dens.

What was once a noisy hub is now a peaceful enclave filled with colourful canal boats and yachts, a coveted residential spot for commuters to the City or Canary Wharf.

In the distance a train rushes into Westferry station and beyond it Limehouse Link roars with traffic, but the docks are silent spare for a resident talking on the phone on their balcony above.

Crossing the road back onto Narrow Street, the alluring smell of potatoes wafts out of Gordon Ramsay’s The Narrow.

A perfect lunch spot overlooking the Thames, it has a cosy conservatory for a winter lunch with views of the jagged skylines of Canary Wharf and the city of London.

Outside The Narrow, the Thames Path breaks into wooden slats, and my feet bounce along them feeling the muscle memory of approaching the seaside as I turn onto Ratcliff Beach.

I was suspicious that a beach in London would be underwhelming, but when I climbed down the stairs I nearly gasped as my feet thudded onto soft sand.

I pocket a few shells and watch an excitable husky race into the Thames to frighten some ducks while its owners sit on the beach chatting in Spanish.

Back on Narrow Street, The Grapes beckons me in with its warmly lit windows glowing like an ember. A sign of a beloved pub, even on a weekday it is still full of people enjoying an afternoon pint.

“Every year it takes me less time than the year before,” he says, glancing up at the baubles he’s dutifully strung up for the last six years.

Sergio tells me that he once spent Christmas Day here with the pub’s co-owner, actor Ian McKellen, and the idea of spending Christmas with Gandalf warms my heart.

The Grapes is nearly 500 years old, and in the opening chapter of Our Mutual Friend, Charles Dickens describes it teetering over the Thames.

The terrace now hangs over an Antony Gormley sculpture of a man standing on a twenty-foot pillar in the Thames, bought by McKellen.

At high tide, he looks as though he is walking on water; now, at low tide, he casts a long shadow across the beach facing towards Canary Wharf, his back to the City of London skyline.

I order one of The Grapes’ tapas dishes, goat’s cheese and jalapeño balls which are deliciously spicy, and Sergio tries to convince me to stay for their famous Monday pub quiz.

While the rest of Narrow Street is quiet, in The Grapes Sergio jokes with locals on a nearby table, entertaining everyone on this plodding afternoon by singing the songs they request, polishing glasses while he belts out Elvis to peals of laughter.

Dickens is rumoured to have danced on tables here, and although the demographic of Narrow Street has changed over the centuries, The Grapes remains the heart of the street.